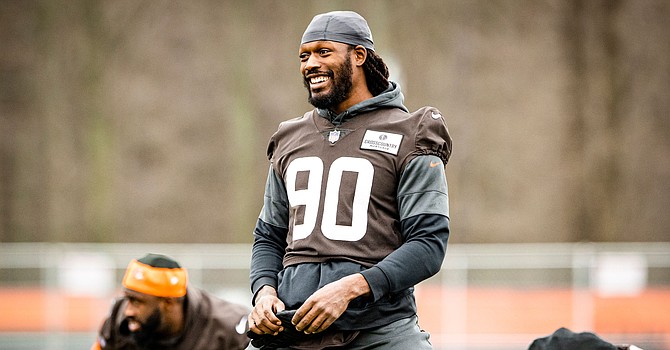 Second in a series reviewing the Browns’ 2021 season …

Entering his third season on the job, Andrew Berry is still the youngest general manager in the NFL. The reality of his position is the job only gets tougher, never easier.

Each year of a GM’s lifespan with an organization the pieces to a championship puzzle get harder to fit. Injuries, contract extensions, salary cap restraints all get complicated the longer a nucleus stays together. Especially after your quarterback comes off his rookie contract.

By the time of Berry’s 35th birthday on March 30, he will have made a flurry of player transactions that will set up his third player draft and reshape the Browns’ roster for 2022.

A year ago in the month of March alone, Berry made 20 player transactions, which included free agent signings and re-signings, contract tenders to potential free agents and contract terminations/player releases. That number does not include another 12 decisions to allow players with expiring contracts to leave.

His docket this year should be no less busy.

On top of it – by far the most impactful decision made by the Browns this transaction season – is how to proceed with the starting quarterback position.

Berry and coach Kevin Stefanski both have said they “fully expect Baker [Mayfield] to be our starter and bounce back” from an injury-plagued season and recover from surgery on his left shoulder. That is the team narrative in January. But it doesn’t mean they won’t explore options to upgrade the position in March. Ergo, it figures to be a prevailing storyline throughout the transaction season.

Aside from Mayfield, there are more than 20 roster decisions to be made.

Here is a look at the more pressing ones.

Players whose contracts are up and can become unrestricted free agents

1. Defensive end Jadeveon Clowney: Injuries have been the story of his career, but he was healthy for 14 games in a one-year “prove-it” deal for $8 million + incentives with the Browns. Two of the missed games were because of COVID and only one because of injury. As such, he was able to hit a $250,000 incentive for 60 percent play time and a $750,000 bonus for nine sacks. Clowney was all smiles after the 17th game, happy for not having to get any injury “fixed” in the offseason and genuinely pleased with his fourth team in four years. He admitted money “always” is a factor in choosing his destination, but added it’s “not about the most.” He seems agreeable to staying. The Browns would be wise to construct another short-term offer – no longer than two years – that would dissuade Clowney from seeking a long-term deal elsewhere. Clowney, 29 next month, should be the No. 1 priority in this group.

2. Linebacker Anthony Walker: He led the team with 113 tackles – 39 more than runner-up Jeremiah Owusu-Koramoah – and led linebackers with a 62.3 percent snap count. He wound up pulling in about $3.2 million with incentives on a one-year deal. Something similar seems in order. He turns 27 in August.

3. Tight end David Njoku: Berry was a part of the front office that traded up into the first round to take Njoku in the 2017 draft. He still likes Njoku a lot and Stefanski and his staff appear over the hump in improving Njoku’s consistency and having him buy-in as a willing blocker. Njoku remains the most athletic and only explosive pass receiver in the tight ends room. The issue is whether the Browns want to reinvest the market value for Njoku, which is projected by Spotrac.com to be in the $28 million range over four years.

4. Safeties Ronnie Harrison and M.J. Stewart: They’re grouped together here because it’s more likely the Browns would choose to bring back one or the other, but not both. A year ago, it seemed Harrison would be in the defense’s long-term plans. But Stewart came on strong in three starts to close out the season. Harrison curbed his penalty problem after an ejection in Game 1, but has missed 10 games the past two years because of injuries and COVID. Both players were drafted in 2018. A little known fact is that Stewart was taken higher -- Stewart 53rd overall by Tampa Bay in the second round and Harrison 93rd overall in the third round by Jacksonville.

5. Receiver Rashard Higgins: Every year Higgins goes through this stay-or-go song-and-dance. I sense the music stops with him leaving this time, though I hope not. His snap counts and targets have remained fairly steady for five seasons, comparable to that of a fourth or fifth receiver. He seems he has more to give, but nobody can explain why he disappears for long stretches over a season, no matter the coaching staff.

Players whose contracts are up and can be restricted free agents

6. Kicker Chase McLaughlin: He made his first 10 field goals and then had one from 41 yards blocked against Denver. He proceeded to miss 6 of his last 11 tries. He was 4 of 10 between 40-49 yards and 4 of 4 from 50+. For his career, he’s 10 of 21 from 40-49 yards. Unless the Browns plan on taking delay-of-game penalties to push his attempts over 49 yards, they should seek an answer to this problematic position. Good lord, we’re coming up on 10 years since Phil Dawson left and they haven't come close to replacing him.

7. Running back D’Ernest Johnson: Since he was undrafted, the Browns would have to tender him almost $4 million to get a second-round draft pick in return if he signed elsewhere. That’s too much for a RB3. But they can retain him with a multi-year contract with a much lower cap number. With Kareem Hunt entering his final year in 2022, Johnson would appear next man up to back-up Nick Chubb. He should be retained.

8. Receiver Jarvis Landry: His boycott of media since Odell Beckham Jr. was released speaks volumes. So does Berry’s comments when asked if Landry would return in his final contract year in 2022 at $14.3 million in salary and $16.553 million in cap space. Berry spoke respectfully of Landry in the past tense, not the future. Seems a mutual parting is likely.

9. Quarterback Case Keenum: It was assumed the Browns gave Keenum a fairly generous free agent deal for a backup in 2020 ($18 million over three years) because they felt he could either challenge Mayfield or win in place of him when needed. Their actions this year said otherwise, as Keenum only started two times with Mayfield deactivated. He won them both, leaving everyone to wonder why they didn’t play him and give Mayfield time to heal his shoulder. At $5.5 million in 2022 ($7.833 million cap number), you’d think the Browns could put that money to better use than merely holding the Microsoft tablet on the sideline.

10. Center JC Tretter: The anchor of the offensive line finally saw his 78 consecutive-game streak snap because of COVID, ironically, after the union president followed his own advice and volunteered to test for COVID, and failed. In his place, 2020 fifth-round draft pick Nick Harris filled in more than adequately against the Packers. Tretter wants to come back for his last contract year, but at $7.9 million ($9.875 million cap number) it will be a tough call for the Browns to make.