The Browns At 75 Years Old: My Top 10 Head Coaches 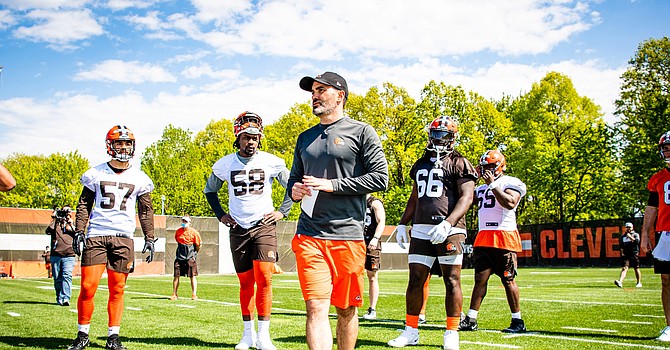 In only one season, Kevin Stefanski has staked a place in the top five of all-time Browns head coaches. (Cleveland Browns)

In celebration of the 75th anniversary of the Browns, I will commemorate the franchise with periodic lists honoring top moments, players, coaches, games and characters from my history as a beat writer and analyst.

In their first 50 years, the Browns had eight full-time head coaches. Four of them had winning records.

In their last 22 years – the so-called expansion era -- the Browns had 10 full-time head coaches. Only one had a winning record.

So, do the math. When devising a list of the top 10 head coaches in Browns history, five of them own losing records.

It doesn’t mean they weren’t good coaches. It means their situations weren’t ideal.

A Hall of Fame offensive tackle and a five-time NFL champion with the Green Bay Packers, Vince Lombardi called Gregg “the finest player I ever coached.” He probably would have been one of the game’s greatest line coaches, but he was elevated from that post after only season and named Browns head coach. Gregg brought Lombardi-like discipline to a Browns team that needed it badly. His 1975 team lost its first nine games before winning three of its last five. And then, after a quarterback change to Brian Sipe, the Browns fell one win short of winning the AFC Central Division in 1976. Gregg was fired with one game left in the 1977 season and the Browns 6-7 and eliminated from the playoffs. He would prove his coaching acumen by leading the Cincinnati Bengals to the Super Bowl following the 1981 season.

One of the great defensive coordinators in NFL history, Carson got his head coach break in 1989 at the age of 59. His marching orders were simple – leave the offense alone and just field a defense to beat John Elway. Carson promptly produced the greatest NFL coaching debut in history, one that will never be topped – a 51-0 mauling of Chuck Noll’s Pittsburgh Steelers. A notorious self-persecutor who took no joy in defeating Noll, his former boss, Carson lamented after that stunning performance, “It can only go downhill from here.” It did, of course. But Carson had some memorable triumphs, including a 16-13 win over Elway in a 1989 regular-season game and a classic, 34-30 victory over Jim Kelly’s Buffalo Bills in the 1989 division playoff. Elway prevailed in the 1989 AFC Championship Game, 37-21, marking the beginning of the end of Carson’s short-lived tenure. He was fired after a 2-7 start in 1990 – but not before Carson defeated Elway again, 30-29, in Denver.

Considered a coup for the Browns when they lured him from the University of Miami, Davis instantly changed the culture of a 5-27 expansion team. The Browns went 7-9 and then 9-7 to earn their first playoff appearance in the fourth year of their expansion era. Davis’ demise started with the death of owner Al Lerner. A power vacuum was created and Davis seized it, envisioning himself the second coming of former Dallas Cowboys football czar Jimmy Johnson. Davis dismantled his playoff team and never recovered. His fatal error was choosing to sign ex-49ers quarterback Jeff Garcia in 2004 rather than drafting Ben Roethlisberger. It nose-dived from there.

Only 39 when he left as Bill Parcells’ defensive coordinator of the Super Bowl champion New York Giants, Belichick suffered real challenges as Browns head coach, such as taking over an aging, if popular, team, and working for an emotional owner grown increasingly irrational as he careened toward personal bankruptcy. Belichick exacerbated his challenges by cutting popular players, including quarterback icon Bernie Kosar. All of it obscured his steady progress, both on the field and within a football organization that proved ahead of its time. Not only did Belichick survive the release of Kosar, he made the playoffs the following season with a defense that still holds the franchise record for fewest points allowed. Belichick’s wild-card playoff victory over Parcells’ New England Patriots seemed to validate owner Art Modell’s stubborn confidence in him. But it all came unraveled when Modell secretly cut a deal to move the team to Baltimore in 1995. The bombshell was dropped with the Browns in first place – and the bottom fell out. Modell fired him rather than take him to Baltimore.

The first and only Browns coach hired by Modell with previous NFL head coach experience, Skorich was promoted from offensive coordinator when Blanton Collier retired. Skorich progressively fared worse in each of his four seasons – from first place to second to third and eventually to the first last-place finish in team annals. He was most noted for being the coach of the Browns team that scared the bejabbers out of Don Shula’s perfect Miami Dolphins season in 1971, losing in the playoffs, 20-14.

His Kardiac Kids were prolific offensively and consistently won in dramatic fashion, making Rutigliano one of the most beloved coaches in Browns history. The 1980 season, engineered by matinee idol quarterback and league MVP Brian Sipe, was so fun and exciting, it spawned numerous home-made Browns hype songs that filled the radio airwaves. The season ended in heartbreak – a Sipe interception in the end zone in a wild-card playoff game against the Oakland Raiders – but became revered over time. Rutigliano’s demise came when he forsook an aging Sipe for 1980 fourth-round pick Paul McDonald of USC.

An improbable 11-5 season in his first year during the mighty challenges of the 2020 coronavirus pandemic earned him NFL coach-of-the-year honors, the only Browns coach other than Gregg in 1976 to claim the award. Stefanski capped his rookie season by “coaching” the Browns to their first win in Heinz Field over Ben Roethlisberger and Mike Tomlin and their first post-season win on the road since 1969. Stefanski watched the game from his rec room while quarantined with Covid-19, but he coached his coaches throughout the practice week and kept the team focused despite a hectic week of interruptions caused by NFL protocols.

Rutigliano’s defensive coordinator made a 1-7 team 4-4 overnight as interim coach, and then led playoff appearances in each of his full four seasons as head coach. Stubborn as a mule and buttoned-down like his flannel shirts, Schottenheimer’s corny catch-phrases were effective in galvanizing a young team built around quarterback Bernie Kosar and a ferocious 3-4 defense. Schottenheimer demise was the infamous “prevent defense” that enabled John Elway to orchestrate a legendary 98-yard game-tying drive in an epic Browns heart-break playoff loss.

An eminent figure in Browns history, he lived up to the incredible task of succeeding Paul Brown – without Brown’s blessing – and coached the Browns to their last NFL championship in 1964. By doing so, Collier validated the controversial firing of Brown by Art Modell and helped make Modell a civic leader in Cleveland and mover-and-shaker in the NFL for decades.

Founding coach, legendary figure, NFL pioneer and creator of an unmatched pro football dynasty that resulted in 10 league championship appearances and seven titles in its first 10 seasons. Brown’s coaching tree spawned future Hall of Fame coaches Weeb Ewbank, Don Shula, Bill Walsh and Chuck Noll. Brown refrained from numerous opportunities to buy the team because he considered himself the owner without the cash investment. When Modell, a New York City advertising executive, purchased the Browns in 1961, it created an immediate clash of egos that even Brown could not win.