Browns Should Act Swiftly And Trade For J.J. Watt 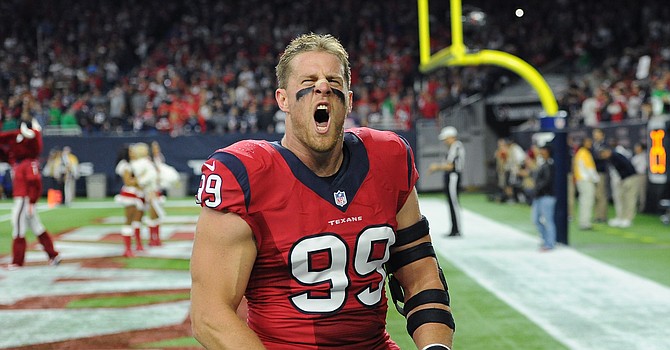 Adding the three-time defensive player-of-the-year to complement Myles Garrett would put the Browns into the thick of the AFC race in 2021. (Denver Post)

Browns should act swiftly and trade for J.J. Watt

Takeaways from around the NFL …

Deshaun Watson’s formal request to be traded created hysteria on social media among fans and media alike. It likely will result in a bull rush of teams contacting new Houston Texans GM Nick Caserio about the price tag for the talented quarterback.

Should the Browns call the Texans?

But not about Watson.

The Browns should beat the rush for another Houston player who figures to become available as a result of the team’s imminent rebuilding mode. The Browns should make a pitch immediately for defensive end J.J. Watt.

Because it is Watt – not Watson – who is the right player at the right time to move the Browns to the front of the pack in pursuit of the two-time AFC champion Kansas City Chiefs.

You want a high-powered complement to Myles Garrett? Imagine the AFC North having to deal with Garrett on one side of the pass rush and Watt on the other side. Ben Roethlisberger would cry himself a fourth river at the confluence behind Heinz Field.

Watt wants no part of the rebuilding project confronting the Texans. Late in the year, he expressed frustration with the lackadaisical effort of his losing teammates. The three-time NFL defensive player is on the back nine of a Hall of Fame-bound career. He desperately wants to compete for a Super Bowl before retiring. Joining the Browns would give him a good chance at that.

Watt has suffered major injuries that limited him to three, five and eight games in three of his last five seasons. But at 31, he not only started all 16 games for the Texans in 2020, he led all NFL defensive linemen with 1,016 snaps. He was on the field for 91.5 percent of his team’s defensive snaps.

If Watt asks out, the Texans would accommodate him. He would help them recoup high draft picks carelessly traded by former coach Bill O’Brien. They are without first- and second-round draft picks in the 2021 draft. I would offer a second-round pick plus a conditional pick in 2022 based on his playing time and performance incentives. Maybe a deal could include other players, who knows? Start the conversation.

Watt has one year left on his contract for $17.5 million. That’s too high a number as the Browns plot future contract extensions for core players. But it can easily be reduced with a multi-year deal.

Watt’s character is exemplary. He would fit perfectly in the culture now in place. On the field, he could do for the Browns what Reggie White did for the Green Bay Packers in the 1990s.

Come to think of it, the Browns better act fast before Watt’s home-state Packers make a run at him.

NFL as in Not For Long

The quarterback situation in the NFL is going to be crazy in the coming transaction season.

Coming up are big-time contract extensions for 2018 first-round quarterbacks Lamar Jackson of the Baltimore Ravens, Josh Allen of the Buffalo Bills and Baker Mayfield.

Expect those numbers to exceed -- yes, exceed -- Watson’s $156 million deal on all fronts. And in two years, expect the deals to be outdated – too high or too low.

That’s how swiftly things change in the NFL.

The Texans took grief for interviewing still-active quarterback Josh McCown for their vacant head coach position. Turns out it was an interview to gauge McCown’s head coach potential. They’re expected to name McCown to new coach David Culley’s offensive staff. The long-range plan appears to be to groom McCown as the eventual successor to Culley, 65, who became the oldest first-time NFL head coach in history …

One trend of this NFL hiring season was the rapid ascension of former NFL quarterbacks to the coaching ranks. Besides McCown, former quarterbacks who landed jobs as QB coaches without much, if any, coaching experience included Charlie Frye (Dolphins) and Mark Brunell (Lions) ...

It's incomprehensible that Chiefs offensive coordinator Eric Bieniemy has been shut out again from the head coach hiring season. It seems as if Bieniemy is being penalized for the Chiefs' success. If the Chiefs had lost in the playoffs over the past two years and Bieniemy were made available during the height of the hiring season, he'd be a head coach by now.