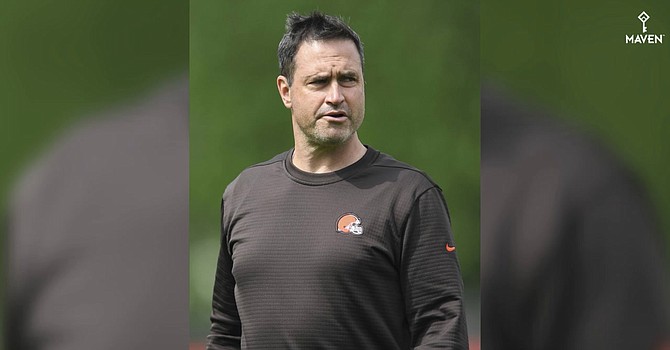 Mike Priefer shouldn't be fazed by the pressures of working a playoff game as acting head coach. The former Naval Officer flew helicopter missions in the Persian Gulf War. (Si.com)

Before Kevin Stefanski ever showed how good a head coach he could be on game days, his first acts as Browns coach last January tipped his hand.

He hired good assistant coaches, empowered them, and then collaborated with them to build game plans and call plays.

More than ever, that practice will serve the Browns well Sunday in Heinz Field.

After leading the Browns to an 11-5 record and their first post-season appearance in 18 years, Stefanski cruelly has been disqualified from coaching in the game because of Covid-19 protocols.

He must rely on his top three coordinators to manage the game and lead a severely Covid-reduced roster to attempt what would rank as one of the greatest upsets ever over their long-time tormentors.

Here’s a look at who’s who on the Browns’ sideline Sunday night in Heinz Field:

The only holdover from Freddie Kitchens’ staff among the coordinators, Priefer was the logical choice by Stefanski to assume the role of acting head coach. His specialty requires a familiarity with the entire roster and the preparedness for specialized game situations. Plus, Priefer served as acting coach for Mike Zimmer in a Vikings game in 2016 and handled the stressful role flawlessly.

Priefer said he has prepped with Stefanski and Dave Giuliani, Browns director of research and strategy, who is the “eye in the sky” from the analytics department to go over potential game management decisions.

Priefer is a Cleveland native and served in the Navy during the Persian Gulf War as a helicopter pilot before following his father, Chuck, as a football coach. The Browns were his sixth NFL team as a special teams coach. He worked alongside Stefanski for eight seasons with the Vikings.

“We have talked about it during the week. Even on gameday, we talk situational football. Being in the position I am in on special teams, I understand situational football, and I am kind of into that mode anyway on gameday. That part will not change, but I am going to try to do exactly what Kevin would want to have happen in those situations.

“I feel awful for Kevin. When you do not have everybody there, I feel for those guys and especially Kevin being a first-year head coach. I know he does not want it to be about him, but a lot of it is about him and what he has accomplished and what we have accomplished together.”

He never worked with Stefanski before leaving the Bengals -- with Heisman-winning quarterback Joe Burrow on his way to Cincinnati -- to serve as personal tutor to Baker Mayfield and Stefanski’s top offensive coach. All three have shared a close professional relationship that has certainly helped raise the level of Mayfield’s game and the offense.

Van Pelt has been the voice of all offensive meetings since he was hired. Initial plans were for him to audition as play-caller during the preseason, but games were canceled due to the pandemic and Stefanski assumed the role.

A native of Pittsburgh and former NFL quarterback, Van Pelt has been a play-caller only one previous time in his 15 years as an NFL assistant coach. He took over as coordinator and play-caller with Buffalo for the 2009 season when Bills coach Dick Jauron surprisingly fired Turk Schonert after training camp.

“I really do not have an ‘approach,’” Van Pelt said. “Obviously, I have a good feel of Kevin and how he has called it throughout the course of the season. I want to stay true to his beliefs in the offense, and I feel the same way.

“Obviously, it will be a little bit different just because of the nature. Nobody calls it the same. Hopefully, it will be very similar. We have had a lot of success offensively. My hope is at the end of the game there are not too many times where he is yelling at his TV going, ‘What the heck are you doing.’

“I am definitely going to lean on the guys who will be available on gameday for us. Nothing will change other than just the fact that I will be calling them. That would be it. I will still take the input from the guys. I will have a million questions, but we will get through it together.”

He’ll probably be the least affected by Stefanski’s absence because he has enjoyed virtual autonomy over his side of the ball from Day 1. Stefanski has coached just about every position group on offense, but none on defense, so he trusts Woods to run the defense without interference.

“He kind of lets us run our side of the ball,” Woods said. “I am going to do my same deal that I have always done a game day and the same with AVP. I feel like we will be fine, but I will miss seeing him on the sideline for sure.”

Woods considers Steelers coach Mike Tomlin his coaching mentor. They shared the 2005 season together on Jon Gruden’s staff in Tampa. When Tomlin became defensive coordinator with the Vikings the next year, he took Woods with him and made him defensive backs coach.

When Tomlin graduated to head coach of the Steelers, Woods stayed in Minnesota for eight seasons alongside Stefanski, the offensive up-and-comer. Woods was Vance Joseph's defensive coordinator two seasons in Denver, then expanded his game by serving last season under San Francisco coordinator Robert Saleh.

It’s a good thing Woods doesn’t have to concern himself with additional responsibilities on Sunday.

He has enough on his plate trying to refine technique issues of emergency starting cornerback Robert Jackson that surfaced in last week’s game, re-implement B.J. Goodson into the linebacker mix after a two-week absence, and manufacture a pass rush with Myles Garrett coming off a no-hitter in the last Steelers game and Olivier Vernon sidelined with a ruptured Achilles tendon – all without the benefit of possibly a single practice on the field, much less a full week of practice.