Mock Draft 2.0: Browns Stay At Offensive Tackle, But Are Forced To Change The Name On Their Card 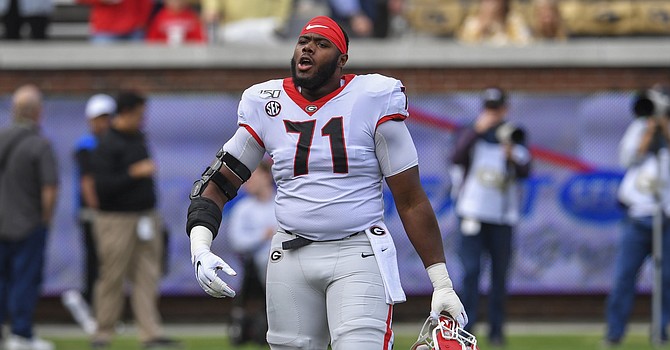 Andrew Thomas was a three-year starter at Georgia, his last two seasons at left tackle. (si.com)

Few teams, if any, have been as busy as the Browns in adding players this week.

New GM Andrew Berry upped the total to nine on Thursday when he agreed to one-year deals, reportedly, with:

Add those to one-year deals on Wednesday with safety Karl Joseph (Raiders) and linebacker B.J. Goodson (Packers), plus a trade for fullback Andy Janovich (Broncos).

All of which does not change our priority for the Browns’ first pick in the April 23 draft. But other factors have put a new name on the card – Andrew Thomas of Georgia.

Everybody seems to not want the Bengals to make this pick. First came the narrative that Burrow wouldn’t play for them. Now there is a sentiment building that the Bengals won’t be able to resist inevitable trade offers coming from Miami or the Chargers, or some other team. I’m not buying it.

Given the instant impact in the NFL by Buckeye predecessors Joey and Nick Bosa, I sincerely doubt new coach Ron Rivera would budge from this choice. But he is going to be receiving similar trade offers for this pick after the Bengals reject them.

GM Bob Quinn and coach Matt Patricia have stocked up on defensive players, three of which came from their Patriots farm system – linebacker Jamie Collins, defensive back Duron Harmon and nose tackle Danny Shelton. They also added cornerback Desmond Trufant. Clearly, they feel the pressure to win and don’t have the urge to take a franchise quarterback hopeful and sit him one year behind Matthew Stafford. They’re the best bet to trade down with a team that covets the Alabama quarterback.

I may change the player, but I don’t see GM Dave Gettleman changing his mind about filling a giant hole at offensive tackle.

I wrote last week that I didn’t see them settling for the third-ranked quarterback in this draft. I still feel that way, and expect them to overpay for the No. 3 pick to take Tagovailoa. Since I don’t project trades in my mock, I have to pencil in another player for them. And after emptying the vault for cornerback Byron Jones – giving them the two highest-paid cornerbacks in the NFL – I had to change from my first mock. So we go with Herbert here.

They let QB Philip Rivers leave to Indianapolis and added two veteran offensive linemen – tackle Bryan Bulaga and guard Trai Turner. So why a tackle here and not a quarterback? Well, they traded left tackle Russell Okung to acquire Turner and Bulaga is a right tackle. So there’s a new need at left tackle. As for quarterback? Stay tuned.

After agreeing to terms with free agent quarterback Teddy Bridgewater and trading for left tackle Okung, they have a plethora of needs on defense to address. Foremost is cornerback as new coach Matt Rhule enters a division filled with three future Hall of Fame quarterbacks – Matt Ryan in Atlanta, Drew Brees in New Orleans and Tom Brady in Tampa.

The trade (heist?) for Houston receiver DeAndre Hopkins would appear to set up the Cardinals to address needs at right tackle or on defense. After all, 2019 redshirt receiver Hakeem Butler will be back to add to coach Kliff Kingsbury’s arsenal. But I’m sticking with Lamb for at least another week.

In a not-so-shocking development, the Jags’ Khan family-owned analytics company chooses the athletically-gifted Simmons over the top-rated defensive tackle who stumbled through the underwear Olympics at the NFL combine.

With two tackles gone, there’s no need to panic. This rare elite tackle class is four-deep. Thomas was a three-year starter at tackle (the last two seasons on the left side) against some of the best pass rushers in college football. His arms are extra long and his feet are agile enough to run the Browns’ wide-zone scheme.