Cancelling Preseason Games Hurts The Browns More Than Most Teams 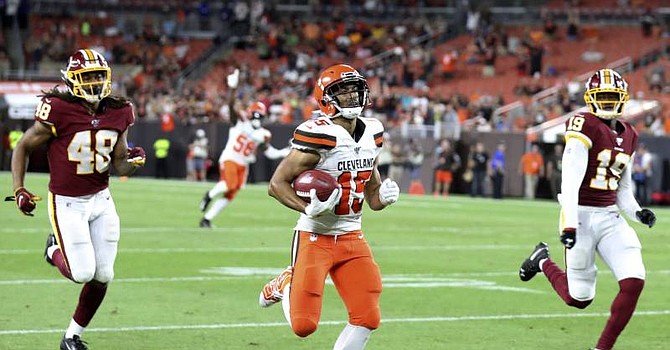 Will there be another Damon Sheehy-Guiseppe without preseason games? (bleacherreport.com)

Takeaways from the start of a very weird Browns training camp …

Be careful what you ask for

Ever since I’ve covered the NFL, there existed a debate about preseason games. Are they really necessary?

This year we’re going to find out.

Preseason games were canceled because of Covid-19. Fans and media greeted the news with rousing applause. The general response was “Good riddance to bad rubbish.”

Dare I say I miss them already?

And I bet the coaches and players will miss them, too.

Preseason games served a purpose. But they suffered horrible PR and were mis-used by most coaches.

The biggest problem was NFL owners had the gall to charge season ticket-holders – their best customers – full price for games that didn’t count in the standings. Why? Because they could. It was audacious, greedy and obnoxious.

Over time, an equally big problem arose. An influx of younger, new-guard coaches became increasingly afraid to play their starters. Even the so-called dress rehearsal third game became a farce. Last year, the Browns barely played starters one series in the third game.

As a result, teams came out rusty and unprepared for Week 1, if not the whole first month of the season. That’s on the coaches. They lost track of the purpose of preseason – to prepare the team for the real season. Coaches lived in their fears instead of hardening their teams for the long haul ahead.

The cancellation of preseason games hurts the teams with new coaches implementing new offenses and defenses – like the Browns. It hurts undrafted or lower-drafted players, and other longshot roster hopefuls needing to capitalize on every game opportunity.

It also hurts new coach Kevin Stefanski in trying to gauge whether he can trust coordinator Alex Van Pelt with offensive play-calling duties. The plan was for Van Pelt to call plays in a couple of preseason games. Now, Stefanski will have to create opportunities in the short, live-tackling portion of this condensed camp in the dog days of late August.

If ever a preseason schedule was needed, this was the year for the Browns.

Some will say college football manages nicely without preseason games. Actually, the Power 5 programs always have had a preseason. It’s their pre-conference slate of cupcake opponents. They just don’t call it preseason.

NFL preseason games were destined to be cut to two when the league expands to 17 regular-season games in 2021-23. I think this pandemic-ruined year will prove that two games are better than none.

NFL players have the choice to opt out of playing this year because of Covid-19.

Already, 25 players have notified their teams they wish to opt out. No Browns have made this choice yet.

Hardest hit has been the Patriots. Six Patriots have chosen to opt out, including starting linebacker Donta Hightower, safety Patrick Chung and offensive tackle Marcus Cannon.

The league and players union agreed to compensate opt-out players. Players designated as higher-risk, due to specified health factors, receive a $350,000 stipend, or advance on their 2020 salary, which tolls into 2021, and they receive an accrued NFL season toward free agency. Players designated voluntary opt-out receive a $150,000 advance on their tolled contract but no accrued season.

These are obviously tough choices and reflect huge sacrifices by the players. Hightower was scheduled to make $8 million in salary this season, and as much as $2.875 million in a roster bonus and incentives. He is the father of a newborn son. His mother reportedly has Type 2 diabetes.

There probably will be many more to make this choice.

Players have until seven days after the amended agreement with the league and players is signed to opt out.

With NFL training camps now closed to spectators, media coverage will change – for the worse.

There will be no personal interviews with coaches or players. All interviews will be conducted via Zoom calls in group sessions. Everything is being homogenized.

Also, reporting of what’s actually happening on the practice field will be severely restricted. What those restrictions have to do with Covid-19 is anybody’s guess.

Ultimately, teams will fill this self-created vacuum of media availability with their in-house media departments.

The Browns announced they will launch a daily two-hour show on their media platforms to stream practices and interviews with players and coaches. “Browns Live: Training Camp,” will debut on the first day of Browns practice, August 14, at 2-4 p.m., on the Browns’ website, Mobile App, YouTube channel, Twitter and Facebook pages.