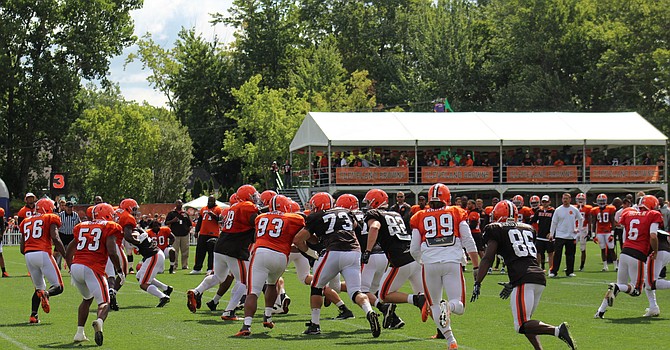 You won't see VIP boxes or spectators at the 2020 Browns training camp.

Are you ready for some football?

Relax. We’re not quite there yet.

Yes, Browns veterans are expected to report to training camp on Tuesday, along with the full squads of all other NFL teams. They will join rookies and quarterbacks who started their re-acclimation process on Friday.

But it will be about three weeks before players get on the field in light, OTA-like practices, and another week after that before they put on full pads.

Remember, the traditional strength-and-conditioning program and offseason practice season of April through June was wiped out by the coronavirus pandemic.

After weeks of negotiating a necessary one-year collective bargaining agreement, the NFL and players union signed off on new rules to get the league back on its feet and hopefully start the 2020 regular season on time.

So it won’t be until -- ta-da -- August 3 when Kevin Stefanski can address his full team in person for the first time since being named coach of the Browns on January 13.

And when he does, it won’t be face to face. Everyone will be wearing face coverings or masks.

That will be just the first “sign of the times.” The 2020 Browns training camp will be unlike any other in history. And it’s likely that training camps will never be the same.

First, fans are not allowed at this year’s training camp. Players won’t be on the practice field until August 12. They won’t wear pads until at least August 17. There are no preseason games. Media access has been severely restricted. There will be no in-person interviews or live tweets of what’s happening on the field.

Here is a primer on the uniqueness of the 2020 Browns training camp.

Players won’t be admitted to the facility until they test negative for Covid-19 two times in a 72-hour period. They are tested in a trailer outside the facility, and then return to their homes or the team hotel (their choice). A positive test results in re-starting the process if there are no symptoms or after symptoms subside.

August 12-16: No-contact practices in helmets and shells. This period is comparable to OTA practices.

August 17-September 6: This is when the team will get in its most work. This three-week period will resemble a traditional training camp prior to the start of a preseason schedule. A maximum of 14 padded practices can be held over this time.

If teams elect to bring 90 players to camp, they must split the squad for on-field work and cut to 80 by August 16. Some teams may only bring 80 from the start. The Browns have not announced their plan on roster size.

The NFL added another injury list for players who either test positive for Covid-19 or have been quarantined after having been in close contact with an infected person or persons. The Browns placed running back Dontrell Hilliard and safety Jovante Moffant on the list on Sunday. Teams may not disclose whether the players tested positive or are in quarantine.

Player have until August 3 to decide to sit out the season due to Covid-19 concerns. Kansas City Chiefs guard Laurent Duvernay-Tardif is the only player to opt out so far.

Fans in the stands

All Browns preseason games have been canceled, along with the joint practices with the Green Bay Packers. The league would like to have teams conduct two practices in their home stadiums in front of fans, but the Browns have not indicated if that will happen.

Attendance at regular-season games depends on the protocols of individual states. The Browns have not announced what will be their capacity restrictions if fans are allowed.

Reduced attendance at games means less league revenue and will have a profound impact on future salary caps. The league and union have agreed to keep the 2020 salary cap at $198.2 million. But it can decrease to $175 million in 2021, and further cuts in revenue would be spread over the following three years.

This comes at a critical time for the Browns. They recently signed pass rusher Myles Garrett to a five-year extension for $125 million beginning in 2022. They have similar contract decisions to make over the coming years on Baker Mayfield, Denzel Ward and Nick Chubb.

That’s $20 million-plus in additional cap numbers for four key players. And that doesn’t even take into account potential fifth-year option increases due for Mayfield and Ward.

But at least training camp is starting on time. Sort of.