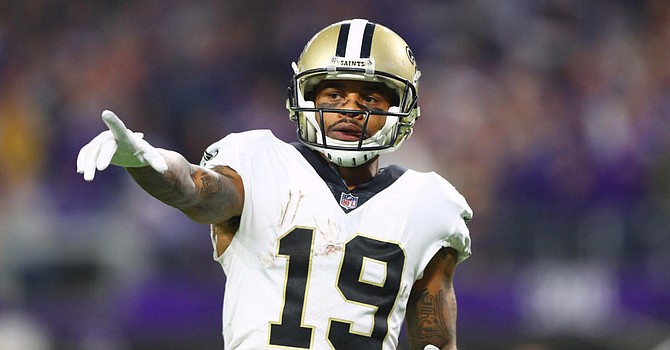 The remarkable career of native Clevelander Ted Ginn Jr. takes him to his sixth NFL team in his 14th season. (cbssports.com)

In a normal year, my summer sabbatical always was followed by a refresher on the comings and goings in the NFL and how they might pertain to the Browns. I’d do that by consuming my favorite NFL annual preview magazines prior to the start of training camp.

This certainly is not a normal year, due to Covid-19 and the elimination of all off-season minicamps and preseason games. But I’m trying to keep it as normal as possible. In fact, the refresher is more valuable than ever. Free agency and the 2020 draft are a distant memory.

On Tuesday, the Browns and the rest of NFL teams begin re-acclimating their veteran players to the new world order of training camp in 2020. Players won’t be admitted to their facilities until they test negative of Covid-19 three times over the next four days.

Then they take routine physicals before embarking on seven days of strength and conditioning.

The Browns won’t take the field for non-contact, unpadded practices until August 12. Practice with pads – and real contact – can’t take place before August 17.

So there’s time to bone up on ever-changing NFL rosters and coaching staffs. I devoured my choice as the best NFL season preview magazine -- Lindy’s Pro Football 2020 Preview – to catch up. (Full disclosure: I write the AFC division previews for Lindy’s.)

Here are some things you may have forgotten in the longer-than-usual NFL offseason.

1.Colin Kaepernick is still unemployed despite some extraordinarily weak backup quarterback situations in the NFL.

Take a look at the QB depth charts on just these legit Super Bowl hopefuls:

The Titans gave Ryan Tannehill a new deal for $118 million over four years after he gripped the reins of a surprise run to the AFC Championship Game. His backups are Logan Woodside and Cole McDonald, neither of whom has played in a real NFL game.

The Steelers stayed with Mason Rudolph and Duck Hodges behind Ben Roethlisberger, who’s coming off a major elbow injury at the age of 38.

The Vikings gave Kirk Cousins a two-year extension worth $66 million guaranteed. His backups are Sean Mannion, who has thrown 75 passes in five NFL seasons, and Iowa rookie Nate Stanley.

Backup quarterback used to be a prominent and vital position for a Super Bowl contender. The fact these teams are not considering Kaepernick to compete for a roster spot plainly reinforces the perception that the racial injustice activist remains persona non grata in the NFL.

2.The Cowboys feel this is their year because of a coaching change to Mike McCarthy and a loaded offensive roster that includes blue-chip receivers Amari Cooper, Michael Gallup and first-round rookie CeeDee Lamb. The new position coach of that impressive stable is Adam Henry, the Browns’ receivers coach the past two years.

3.The Browns have passed on bringing home native Cleveland speedster Ted Ginn Jr. about a half-dozen times over the years. Ginn, 35, begins his 14th NFL season as a receiver and return specialist with the Bears.

It’s Ginn’s sixth team since being drafted ninth overall in 2007 by the Dolphins. To put Ginn’s longevity in perspective, Miami fans were irate the team passed on quarterback Brady Quinn to draft Ginn. Quinn’s been out of the NFL since 2013.

Incidentally, the Bears also added ex-Browns Barkevious Mingo, Tashaun Gipson and Buster Skrine. The Bears are also Mingo’s sixth team in six years. He was Joe Banner’s first-round round draft choice in 2013. He was traded to the Patriots in 2016 and then bounced to the Colts, Seahawks and Texans before signing with the Bears.

4.In 2015, GM Ray Farmer used the Browns’ two No. 1 draft choices on nose tackle Danny Shelton and offensive lineman Cam Erving. Shelton moved on to the Patriots in 2018 and now is with the Lions. Erving was traded to the Chiefs in 2017, picked up a Super Bowl ring last year, and this year signed with the Cowboys as a backup.

5.Corey Coleman, the Browns’ No. 1 pick in 2016 after two trade-downs, is trying to come back from ACL surgery with the Giants. This scouting “tip” from Lindy’s:

“Do not be surprised if WR Corey Coleman plays significant snaps at receiver and kick returner this season for the Giants. The much-traveled former first rounder seems to be training and preparing with a chip on his shoulder after finishing the season on injured reserve. The Giants offer a clear path for playing time if Coleman can show consistent hands and route running like he did for them late in 2018.”

7.Because of injuries, Eagles quarterback Carson Wentz, who was spurned by the Browns with the No. 2 pick of the 2016 draft, has played only nine snaps in Philadelphia’s last six playoff games.

8.The Panthers are starting a new era with rookie coach Matt Rhule, formerly of Baylor. Seven of Rhule’s assistants are in their first NFL season as coaches. One of them is receivers coach Frisman Jackson, a Browns undrafted receiver in 2002-05. Jackson was the first Browns player to wear No. 19 after Bernie Kosar.

9.Since Phil Dawson left Cleveland in free agency in 2013, the Browns have used seven place-kickers. Austin Seibert will be only the second one to begin a second season. Two of Dawson’s would-be successors have made it to a second training camp with new teams – Zane Gonzalez with the Cardinals and Greg Joseph with the Titans.