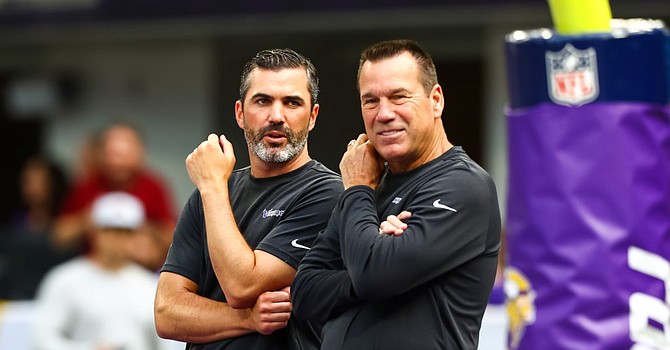 Gary Kubiak was the same age as Kevin Stefanski, 37, when he was interviewed for the Browns head coaching job in 1999.

Kubiak had a few years’ experience as Mike Shanahan’s offensive coordinator with the Denver Broncos. The Browns were just starting up as an expansion team. Owner Al Lerner and President Carmen Policy gave Kubiak his first NFL head coach interview.

“I remember Mr. Lerner, the first thing he said to me … he looked at me and said, ‘Kid, I’ve got shoes older than you.’ I’ll never forget that,” Kubiak recalled in a telephone conversation. “I thought, ‘Well, I’m probably not getting this job.’”

Two NFL head coach stints later, including one as a Super Bowl champion with the Broncos, Kubiak found himself recently giving advice to Stefanski.

The two men joined forces with the Minnesota Vikings in 2019 to revamp the team’s offense in the run-oriented, play action-passing style that Kubiak learned under Shanahan and then passed on to his son, Kyle, now the coach of the Super Bowl-bound San Francisco 49ers. Stefanski was the offensive coordinator and Kubiak the senior advisor and assistant head coach.

When Stefanski left the Vikings to take the Browns’ job this month, Kubiak passed along some words of wisdom.

“Here was my advice to Kevin,” Kubiak said. “The best piece of advice I got when I became a head coach, I had another guy tell me, ‘Koob, it’ll get done.’ And he walked away, and I didn’t know what the hell he was talking about.

“And then I realized, you wake up every day and you’ve got so many things on your plate, you wonder if you can get them all done. You just got to believe in your work and what you’re doing and things will get done. That was my advice to Kevin. Just go to work, work your tail off, get it done and be proud of your work.”

In his opening remarks at his introduction on Jan. 13, Stefanski made no predictions other than to say, “I can just promise you that we are going to work.”

During his first full week on the job, two issues crossed Stefanski’s desk that served as rude awakenings to his new responsibilities.

Receiver Odell Beckham Jr. was in the news for erratic behavior at the LSU college football championship game, and running back Kareem Hunt had small amounts of marijuana seized from his car after a police stop for speeding. These are not matters that offensive coordinators have to deal with.

Until last year, Kubiak only knew Stefanski through his son. Klint Kubiak broke into the NFL in 2013 as a Vikings offensive quality control coach while Stefanski was assistant quarterbacks coach. Klint went on to expand his career at Kansas and the Broncos before returning in 2019 with his dad.

It could have been an awkward situation, but Stefanski, the coordinator, embraced the changes.

“Kevin’s awesome,” Kubiak said. “That tells you what kind of person Kevin is. He basically let all these new guys in his room and yet he was the boss and he put it together and did a great job with that room.

“Kevin’s a wonderful kid. I say he’s a kid because he’s young. He’s a very bright kid, he’s got tremendous people skills, great communicator, yet he has the ability to be tough in situations that you have to be as an NFL coach, such as running the [meeting] room, those type of things. He’s got a skillset that says he’s going to be very successful. So I’m really proud of him and really excited to watch him do his job there in Cleveland. He’ll do a great job.”

Stefanski has come across as soft-spoken in his few public appearances as Browns coach. Kubiak said, “Don’t let that fool you.”

“I think there’s a quality in a good football coach,” Kubiak said. “They’re really good people persons. He’s very excellent in communications, in motivating people. He’s always under control, but yet when it’s time to say, ‘What the hell are we doing here? We have to get this fixed,’ he has no problem with that.

So how does he command a room?

“Really, it’s being yourself. It’s not like you walk in there the first day and start screaming and hollering, ‘Here’s how we’re going to do things.’ You just handle yourself a certain way, and people follow suit.

“Matter of fact, when I talked to Mr. Haslam a couple times about him, he asked me and I said, ‘Jimmy, the way he’ll handle players, the way he handles people, the way he handles himself, he’ll be an example that people will want to follow.’ To me, that’s what you’re looking for.”

Calling plays and managing the game

Stefanski has talked about handing over play-calling duties to a trusted coordinator, but it’s probably not going to happen. Kubiak understands why. When he was head coach of the Houston Texans, it took him three years to hand off play-calling to Kyle Shanahan.

“We all get jobs because we all have a so-called specialty,” Kubiak said. “Most guys don’t get a head [coach] job unless they’ve done something offensively, defensively, special teams, whatever it is. So you come in with that reputation and that specialty. You don’t let that go. That’s what got you where you’re at.

“I think over the course of your career as a head coach, maybe you find somebody you’re comfortable with that you let him start calling plays that help free you up in other directions. But we all start at that point, know what I mean?

“I can remember the first day Mike Shanahan turned to me in a game and said, ‘You call the game.’ I think we all end up with somebody who we get a comfort zone with and we say, ‘Ok, you go ahead.’”

Of course, the NFL sideline is a hectic place during a game. And we have seen many fine offensive coordinators come through town and fail to juggle the multiple tasks of play-calling and game-managing.

Kubiak thinks Stefanski is up to the task.

“Well, the NFL is hectic,” he sighed. “But that’s a strength of his. He can handle a lot of things. You can put a lot of things on his plate. He’s very organized. Very much under control when he operates. Just very confident in his own skin and what he’s being asked to do.”