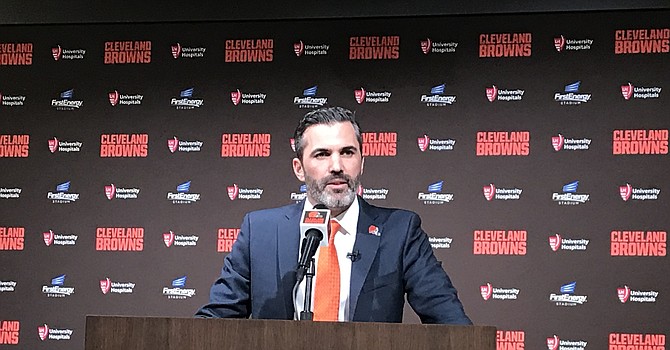 1.This was my 13th Browns head coach introductory press conference. More times than not, I came away thinking, “Now, this could be the right guy.” Fact is, I was wrong on most of them – just like the Browns. First impressions are important in getting the job, but has little to do with doing the job, of course. It has become cliché to scoff at winning the press conference – as if it’s a precursor to inevitably being let down. Bill Belichick is the eternal example of a coach losing every press conference and winning more Super Bowls than any coach in history. Fine. That doesn’t mean losing the press conference guarantees success, either. For the record, Kevin Stefanski crushed his first press conference. Commanding, personable, smart yet not condescending. Overall, very, very composed. Especially considering he had never been in that position before in his 37 years, never been introduced as a head coach at any level. It gave me confidence that he wouldn’t unravel in a crucial situation with a game on the line. It was a good start.

2.I liked the way Stefanski handled the elephant in the room – that he won the job by bowing to the Browns’ demand to make nice with the powerful analytics faction in the building. One incriminating nugget that apparently originated from the Josh McDaniels fan club claimed the Browns want their coach to hand over game plans on Friday for analytics pre-approval. “It is not true,” Stefanski said. “I liked that report. That was a good one. It is silly season for that type of stuff, and I understand that.”

3.Owner Jimmy Haslam was a little more stern in refuting the reports. First, Haslam wouldn’t deny he intends to continue his practice of meeting with his coach each Monday after games. “Let me ask you: If you owned a pro football team, would you meet with the head coach Monday after the game? Of course you would.” Haslam said his sessions generally last 30 to 60 minutes. “I would say that we do not discuss a lot of different things than the questions you all would ask him if you came to the game. It is not a lot different than that,” he said. (Art Modell used to have “Kardiac Kids” coach Sam Rutigliano go through this excruciating breakdown of games at his home; they were neighbors in Waite Hill. Rutigliano once described the meetings to me, “When we won, it was a feast. When we lost, it was a wake.”) Haslam said reports of handing over the game plan for pre-approval or inspection “are just totally inaccurate. I really think they are irresponsible.”

4.There is no denying, however, that Stefanski’s willingness to embrace information provided by the analytics department met a prerequisite for the Browns’ job. It was crucial in the coach falling under perfect alignment with Paul DePodesta, chief strategy officer and architect of the Browns’ plan. “I am looking for any edge we can get on game day and certainly analytics, I know, is another buzzword out there,” Stefanski said. “We are looking to make informed decisions. As a play-caller, or whether it be player evaluation, information is power, so we like to have a lot of information that informs our decisions. I think the set-up that we have here, and meeting with the guys this morning was incredible. I think we are well on our way where we can provide impactful information to our coaches, to our personnel department that can really help the product in terms of wins and losses.” He added, “To me, analytics, I cannot say it enough, it is a tool … I just think it is another tool when it comes to play-calling and personnel. Again, something that the Vikings did, something that I know the Browns do. It just provides more information. We have so much of this information; we have years of it, so let’s use it to our advantage.”

5.Like so many of his predecessors, Stefanski dodged the question about calling the plays on game days. “I think we are going to work through that,” he said. “I think as we put the staff together, if there is someone that is on staff that I feel gives us the best chance to win, that person will call the plays. It does not have to be me. But I think I want to work through that and see as we put the staff together.” I would feel so much better if Stefanski were able to bring along Gary Kubiak as play-caller and senior offensive assistant. Stefanski has worked under five different offensive systems in his 14 years with the Minnesota Vikings. The past season was his first year in the Kubiak system, which is similar to the outside zone running scheme and play-action passing game perfected by Kyle Shanahan. Alas, it appears doubtful that Stefanski would be able to pry either Kubiak, or his son, Klint, Vikings quarterbacks coach, to Cleveland. I would suspect, then, that Stefanski will try to juggle play-calling with game management – at least his first year.

6.Stefanski said the Vikings’ offensive system would be “the jumping off point” for the one he eventually installs with the Browns. It should be music to the ears of Browns’ fans to know he values a physical running game. “Ultimately, this is the AFC North, so the physicality, that aspect of the game will never be too far from our thoughts,” he said. He will talk a lot about “the marriage” of the run and pass game. “I played defensive back [at Penn], and not well,” he said. “When I played, I know what that feels like when you have a run that looks like a pass and a pass that looks like a run. I can tell you in putting our scheme together last year -- it was very comforting when you had a player like [safety] Harrison Smith come up to you and tell you, ‘Man, that is a tough scheme that you are running. This is really hard on the defense.' That gave us great confidence knowing that we were down the right path.”

7.Stefanski’s best lines came after a question about managing the big personalities on the roster he is inheriting. “Yeah, I do not mind personality, because I respect guys that work,” he said. “Personality is welcome, your production is required. I understand that like every team that I have ever been on, there are going to be some guys that bring some different personalities, and I welcome that. But in terms of how that is going to go, it is too hard to say in this moment. I think once we get the guys in the building, we will start to build this thing.”