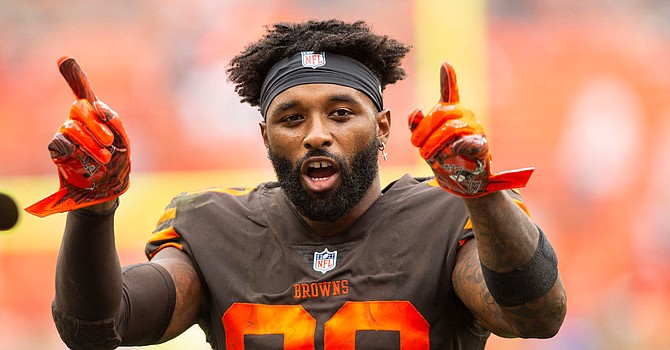 Jarvis Landry was not fined for a phantom blindside block.

Takeaways from all over the sports world …

1.Baker Mayfield was fined $12,500 for criticizing officials for flagging Jarvis Landry for a blindside block that never happened in the Seattle game. “I will probably get fined for saying this, but it was pretty bad today,” Mayfield said. “The guy is squared up with him, running at hm and he is lowering his head into Jarvis. What is he supposed to do? Avoid him? This is not bull fighting. I don’t know. It ticks me off.” Two other NFL players were fined for criticizing the refs last week after the league sent a memo to teams to cool it. The NFL cozily sidles up to the U.S. military with its elaborate pre-game ceremonies and flyovers, but the freedom of speech forever protected by our armed forces apparently is not recognized by the football league.

2.Fines are spelled out in the collective bargaining agreement. The first offense of a blindside block is $28,075. Landry was not fined, however, which means the league disagreed with the call. The official who threw that flag should be fined that amount. By the way, NFL fine money is used to assist retired players in need through two organizations approved by the league and players union. For that reason, the more fines the better.

3.Former Ohio State coach Urban Meyer said on Colin Cowherd’s radio show that he would take the Dallas Cowboys head coaching job. “Absolutely. That one. Yes,” he said. A couple questions: a. What happened to that cyst on his brain? b. Can he wait for the job to open before campaigning so shamelessly?

4.If Jerry Jones does not re-sign coach Jason Garrett, whose contract is up after this year, the Cowboys owner probably would call Oklahoma coach Lincoln Riley first. His second call should be made not to Meyer but to his successor at Ohio State, Ryan Day.

5.Speaking of Day, is there any doubt his first Ohio State team of the post-Meyer era is stronger than either of Meyer’s two OSU teams that qualified for the College Football Playoff?

6.Beth McLeod’s thoughtful gesture to distribute the extensive neck tie collection of her late husband, Fred, to his many friends inside and outside the Cleveland Cavaliers organization is a perfect way of commemorating the beloved former club TV announcer.

8.I’m a huge Francisco Lindor fan – named our second Golden Retriever after him. But Oscar Mercado’s emergence will make it easier to say goodbye when Lindor’s inevitable exit occurs.

9.Tom Brady’s feigned anger with reporters questioning his strange cameo appearance in a Netflix comedy series is so misplaced. I mean, how could anyone not think he was spoofing Patriots owner Bob Kraft’s well-publicized visits to an Asian massage spa last January? What exactly was Brady thinking by agreeing to be portrayed exiting a similar spa in the Netflix series? Geez. And this whole idea of “Mister Kraft” being beyond reproach? Puh-leeze.

10.The more I think about it, the idea of a Nick Chubb-Kareem Hunt “dynamic duo” backfield makes so much sense to me when/if Hunt is reinstated on Nov. 4 for the Browns’ final eight games. Given Chubb’s improved receiving ability, along with Hunt’s, the creative possibilities of using Chubb and Hunt together on the field, along with Landry and Odell Beckham Jr., are irresistible. Consider this: No other NFL team uses two backs the caliber of Chubb and Hunt together. Defenses wouldn’t know how to handle that.

11.If nothing else, it would eradicate the evil, misguided, deranged empty formation inside the 10-yard line, wouldn’t it?

13.The Houston Texans were ridiculed by some for trading two No. 1 draft picks for Miami left tackle Laremy Tunsil. The Los Angeles Rams were applauded for trading two No. 1s for Jacksonville cornerback Jalen Ramsey. I think the Texans got it right and the Rams got it wrong.

15.Any fan who punches Myles Garrett in the face after approaching his car for a selfie is either on drugs or in need of medication.