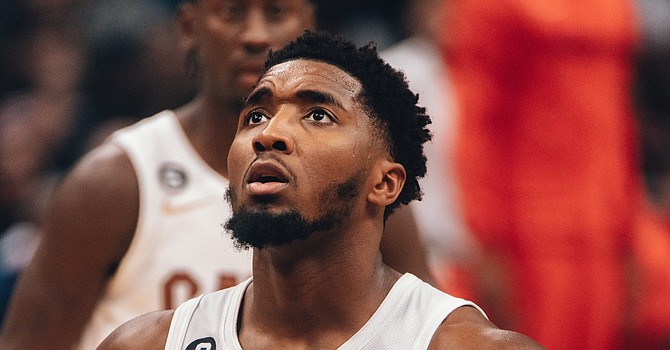 SALT LAKE CITY – Cleveland Cavaliers guard Donovan Mitchell arrived at Vivint Arena late Tuesday afternoon knowing that it was going to be an emotional night. It was his first time playing back in Salt Lake City since the Utah Jazz traded him to Cleveland. It was the first time he was back in the arena he called home for the first five years of his career.

One of the things Mitchell first did when he arrived at the arena was walk down the tunnel nearest the visiting locker room to look out and see the empty arena and the floor he would be playing on a few hours later. It’s something he said was a deviation from his usual routine, but it was a different scenario, after all.

While Mitchell was in the tunnel, the Jazz operations staff was going through the process of running through all of the in-game stuff that was to be featured on Tuesday. This is commonplace in the NBA and includes anything from the national anthem to what games randomly selected members of the crowd will be playing during timeouts.

On Tuesday night there was something else that Mitchell saw while he was in that tunnel: the tribute video for him that the Utah Jazz had planned for his return.

“I got here probably like 4:30 and I just stood in the tunnel, no one can really see you, so that's why I kind of just stand there and just look around. And I just did that just to kind of calm myself down before, because I don't go out to see the floor until I shoot and that's when everybody's there,” Mitchell said after the Cavaliers 116-114 loss in Utah. “Believe it or not, I saw [the tribute video] when I first got here. So, when I first was, I went out there and just stood and looked at the arena, kind of just to see it before you go out there and they were playing it.”

The video featured highlights of what Mitchell did not only on the court while a member of the Jazz, but also highlights of what he did in the community. It opened with what draft night was like for him and showed things like him in the NBA Slam Dunk Contest, NBA All-Star Game, and playoff victories. All of it.

That’s not only what Mitchell said he saw in his mind when he first walked into the tunnel that afternoon.

“The last time I was in here, again, we lost and just seeing that. Seeing game six against OKC. Seeing game five against the Clippers where we lose. But also seeing the nights where I had 46, and career highs and different things, big wins,” Mitchell said. “There’s so much good done in this building. You just kind of want to see it and just let it run through your mind and let it play before you go back into game mode, because you gotta be appreciative of it. This is a long season and there's different things you have to appreciate throughout the year, and I think coming here and have been able to feel that is huge.”

When the video was shown again, this time with the seats filled and the game less than 10 minutes from starting there were cheers from most in the building. Those cheers lasted through the pregame introductions for the Cavs, after which, Mitchell went to hug his mother and his sister who were sitting in the front row next to the basket.

“They were there from the first one. They were there from the first one and the first game against the Nuggets. And to be here, to have them here, they've been through the whole ride with me. The highs and lows, and my sister has sacrificed so much on a day-to-day in her childhood,” Mitchell said. “And for me to just show my appreciation, to show my love and just making sure that they can have whatever, and this life has allowed me to do that and I'm very thankful. But to have them there in this moment, it means the world to me.”

Despite the game not going the way the Mitchell or the Cavs wanted it to, Mitchell did receive the ovation and the welcoming back that he deserved considering what he meant to that franchise throughout his first five seasons in the NBA.

Mitchell was not only the name on the marquee before the game, but he was the biggest star during it, too. He had a game high 46 points for his fifth game of 40 or more points this season. He started off great, scoring 12 of Cleveland’s 24 first quarter points, and did his best to take over in the fourth quarter, closing 17 to close out regulation.

The game swung, however, during a stretch when there was nothing Mitchell could do, through no fault of his own.

The Cavaliers held a 107-102 lead over the Jazz with 1:23 left in regulation when former Cavs guard Jordan Clarkson made a 3-pointer and was fouled by Cleveland’s Caris LeVert. That foul was then upgraded to a flagrant foul – penalty one, awarding Clarkson a free throw and then the ball back to the Jazz. Clarkson made that free throw to make it a 107-106 Cleveland lead. When the Jazz had the ball, LeVert again fouled Clarkson while shooting a 3-pointer. The shot missed, but Clarkson made all three free throws.

In a span of 12 seconds of game time, the Cavaliers went from holding a five-point lead to trailing by two points.

“Feel like they were bad calls,” LeVert said after the game. “First one was a push off and then he kicked his legs. Second one, he kind of jumped backwards. Regardless of that, I have to expect the ref to make a bad call and just be that much better defensively. I will be. That’s on me.”

That sequence turned what would have been a nice win for a Cavaliers team that has struggled to win on the road into a bad 116-114 loss.

“I think they're questionable,” Bickerstaff said of the foul calls. “Offensive players have the ability to cover their spots. If a guy switches his feet in the air, it makes it extremely difficult to guard. So, I don't know what more we could have done. The guy jumps and switches his feet like that, if I go to contest, naturally there's gonna be contact there.”

In all, Cleveland was whistled for 25 fouls compared to the 17 for the Jazz. Utah finished the night 30-of-37 from the foul line on its way to winning the game.