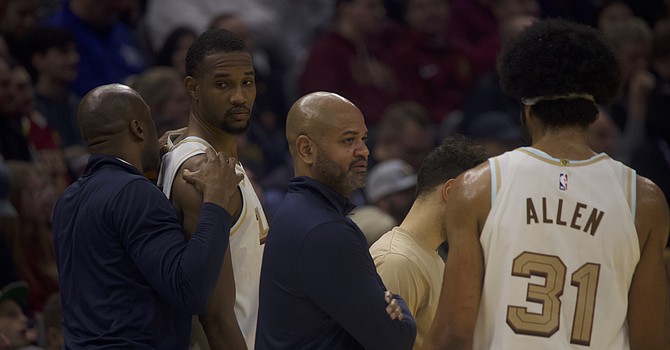 SALT LAKE CITY, UTAH – The Cleveland Cavaliers are halfway through their first season with Donovan Mitchell on the roster. When the trade was reported back at the start of September, it immediately changed expectations for the organization and placed them in a bit of a national spotlight.

Through the first 41 games of the season they’re 26-15 and sitting in fourth place in the Eastern Conference. It’s hard to argue that the start of the year has been anything but a success for the Cavaliers, especially when considering how much time various key members of the rotation have missed due to injuries.

Expecting the Cavaliers to be the best team in basketball right away this season was a bit unfair, even if they did start off 8-1 through their first nine games. Incorporating a talent like Mitchell isn’t always seamless, even if it’s seemed like it at times for the Cavs. That type of addition to an already strong, young roster was always going to see a little bit of growth. From the start of the season until now, it has grown.

There are a few areas that standout in terms of growth for the Cavaliers, but none may be bigger than the pairing between Mitchell and All-Star point guard Darius Garland. Those two have shared the floor in 28 of the first 41 games this season. Typically, when two high-usage guards like Garland and Mitchell come together, there’s a bit more of a learning curve than one that the Cavaliers have experienced.

“I think it's been pretty seamless to be honest with you,” told thelandondemand.com Monday in Phoenix of the pairing. “I think they've figured each other out.

“I think they really motivate each other and they really push each other but they have conversations to help each other get better but there's a cadence to them now and a rhythm and they understand each other's cadence and rhythm and how they each can pick their spots and not, again, have it be that my turn, your turn thing we keep talking about.”

The Cavs are 16-12 on the season when both Mitchell and Garland suit up, including the opening night loss when Garland only played 13 minutes before suffering an eye laceration. As those two continue to be able to share the floor together, the winning percentage should improve.

The other area where the Cavaliers have grown significantly since the start of the season is in closing out games. Early in the season, it was a nightmare at times for the Cavs to finish off opponents. Far too often they would hold a lead and have to fight to keep it or even see it slip away and result in a loss.

They’re far from perfect right now, but the team feels it’s in a better place as games wind down. Part of that is Garland and Mitchell growing together, but another part of it is having the experience of playing in a number of tight games.

“I think the continuity and especially the continuity in impactful moments,” Bickerstaff said. “I think we're a much better fourth quarter team now than we were at the beginning of the year. I think we have a better understanding of who and how we're gonna close games.”

To date the Cavaliers are 15-10 in games that feature clutch time, which is defined by the NBA as being within five points in the last five minutes. After the team lost to the San Antonio Spurs on December 12, the Cavs dropped to 9-8 in those games but had a net rating of -5.5 in clutch time.

Since then, the Cavs are 6-2 in games that feature clutch time, with a net rating of +26.7 in 36 minutes. That’s a pretty significant turnaround from the start of the season.

This isn’t to say that the Cavs are a perfect team down the stretch of games. They still have issues offensively when trying to close out opponents at times, but they are so good defensively in those situations that it can make up for when the offense stagnates.

Where they can still grow

The Cavaliers aren’t a perfect team and have never been confused with such. Like every other team in basketball, there are still things they can improve upon. Bickerstaff has stated numerous times that the goal for this team is to play its best basketball at the end of the season. If the best days for this season are in the past for this group, it would certainly qualify as a disappointment.

When asked where the team can still grow the most, Bickerstaff had a fairly simple response: health.

“I mean, we have not had our full team the entire year,” Bickerstaff said. “Obviously, being able to get Ricky [Rubio] back is gonna be huge for us. You've seen how much time Dean Wade has missed, you know, Donovan's been out, Evan, Jarrett, like we've had what, 17 or 18 different starting lineups already this year? So, I'm most excited about just getting everybody on the floor together and seeing how good we can really be.”

Rubio, who hasn’t played all season, figures to be the next guy to return to the floor of the injured bunch. Bickerstaff mentioned on Monday that he’s “really close” to making his season debut. In late December, he said that the target for Rubio was “early [January]”.

What Rubio looks like after returning from his second torn ACL will be a big deal for the Cavs. The burden that he could potentially remove from Mitchell and Garland and times could pay massive dividends not only during games, but in saving their legs for later on in the season.

The other area where continued growth would be good for the Cavaliers is in the offensive game of Evan Mobley.

This season, Mobley has improved his offensive game, even if his raw counting stats don’t necessarily reflect that. He’s tightened up his handle from last season to now, has improved as a passer, and is shooting almost 60% on shots inside the 3-point arc. He does still need to continue to improve his jump shot, especially as he moves further away from the basket.

“I think he has been more aggressive and more attack-minded,” Bickerstaff said of Mobley. “Putting the ball on the floor, beating his guy, understanding what happens when they switch and how he can create more, advantages when he has a smaller guy on him and his willingness to shoot the ball. We’re trying to get him to expand and he is taking more 3s and getting better at it.”