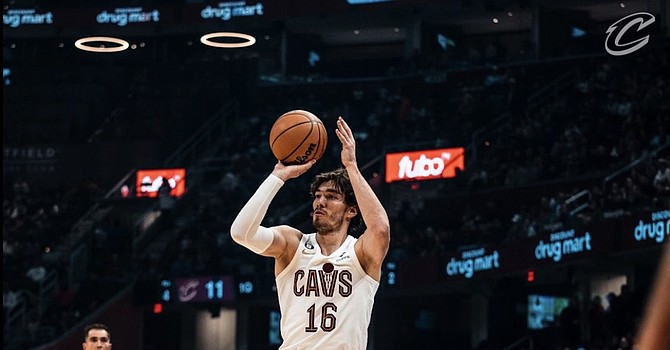 The Cavaliers took care of business on Sunday night against the Miami Heat with a 113-87 win.

Yes, Miami was not a team coming into Cleveland at full-strength, missing a list of players that included both All-Star forward Jimmy Butler and reigning Sixth Man of the Year Tyler Herro. If the Cavs see the Heat in more meaningful games down the line, this likely won’t be the version they see.

On Sunday night the Cavaliers played to the standard that head coach J.B. Bickerstaff frequently speaks about. Defensively, the team held Miami to below 30 points in every quarter, and below 27 in both the second and the third. It was one of the best defensive performances the Cavs have had to date. It’s a game that allows them to build on the win from Friday against Charlotte and feel better about themselves heading into Monday’s game with Atlanta.

The Cavaliers won in part because of good games by both Isaac Okoro and Cedi Osman off the bench. Two players that either haven’t been playing well offensively or playing all that much. On Friday night against Charlotte, Osman was scoreless in just seven minutes while Okoro scored three points in 16 minutes.

Sunday against Miami, both players arguably had their best games of the season. Osman had 20 points and 12 rebounds off the bench and Okoro had 13 points. The Cavaliers outscored Miami by 39 points with Osman on the floor and Sunday was the first time that Okoro hit multiple 3-pointers in a game since last March.

“We've talked about it time and time again. He's a spark plug,” Cavs head coach said of Osman. “He's got a strange energy to him that the guys love, the fans love, but, he wants to be a part of it. I think, I've seen a difference in his approach this year in down moments. I think that's growth for him.”

Part of the reason that Osman played much more on Sunday night was due to Kevin Love’s absence from the lineup with a hairline fracture in his right thumb.
“I’m just trying to be consistent that way, you know?” Osman said. “Whenever my number is called, I’ll be ready and try to bring the best to the team. And I’m just glad I was able to do that tonight and hopefully every other night. I’ll just be ready every time, whenever my number’s called.”

Osman’s role is going to be one that continues to fluctuate. He started off hot at the beginning of the season before shooting just 31% from beyond the arc in his last 12 games. He had just two games in that stretch where he made more than one 3-pointer. Sunday was a game that was needed from the role player, even if the result wasn’t in doubt after the second quarter.

As for Okoro, his minutes have also been very up and down as well. His struggles on the offensive end have been constant, with Sunday being the first time that he reached double figures on the season. It was also the first time that he made multiple 3-pointers in a game. There’s no telling where things will go from here with his game on the offensive end of the floor, but Sunday was nothing if not a positive sign for him. He was attacking in transition and aggressive with the ball in his hands. Those haven’t been as consistent as they need to be for Okoro, but Sunday was a good sign.

“I know I put in a lot of work every day, so just taking my shots, I work on it every single day so I knew eventually it’d start falling,” Okoro said. “Just do what I do best, attack the rim, playmaking, and just playing defense.”

The Heat aren’t exactly playing the best basketball right now, nor are they the healthiest team. On Sunday night they were missing a number of players, which means that getting creative due to personnel.

Miami played a zone defensively for most of the first quarter and a significant chunk of the game. That’s not something that’s seen all that often in the NBA, partially due to defensive rules. The Heat play zone defense much more than most teams in the league, and with it being an oddity, it takes some time to adjust to.

“You just don't see it a lot. It's one of those things where most NBA zones have holes, but, because of your preparation habits and not a lot of teams playing a lot of it, you just don't spend a whole lot of time working on it,” Bickerstaff said. “So, intelligent players, obviously like the group we have, the more you start to see it, the more comfortable you get with it, the more you can find those holes. But initially, it's almost like a shock. You can walk through it in practice and all that stuff, but until you get out there on the floor, because they do different things, they put their smaller guys like Kyle Lowry low, put bigger guys up top, so, it's unique in itself although it looks like a basic two-three. But, again, it just takes some time and our guys I thought did a great job of figuring it out.”

It took the Cavaliers around eight minutes of the first quarter to figure things out. They trailed the Heat 19-11 with 4:02 left in the quarter, but closed the period on a 19-8 run over the final four minutes. From there on our, the Cavs had very little difficulty with Miami’s defense.

Cavs big man Kevin Love missed the game against Miami with the hairline fracture in his right thumb. Prior to the game, Bickerstaff said that the injury happened when Love was going after a loose ball. The team listed Love as doubtful early in the day on Sunday before upgrading him to questionable before ultimately sitting the game out. Bickerstaff added that the team doesn’t expect to be without Love for long.

On Sunday night the Cavs did lose swingman Caris LeVert at halftime. He rolled his ankle in the first half and did not return after the break. Bickerstaff didn’t have much of an update after the game.

“I saw him afterwards, he said he was good,” Bickerstaff said. “He rolled his ankle. From what I heard at halftime, and I haven't talked to the training staff yet, is that it wasn't swollen much. So, we'll see. I don't have many answers yet.”