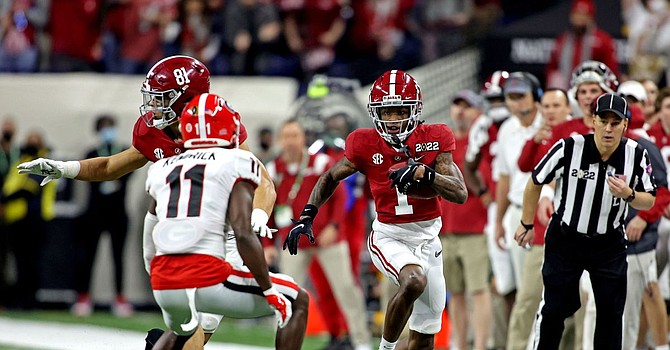 How much did the ACL injury to Alabama receiver Jameson Williams in the CFP National Championship change Browns' draft plans? (USA Today)

First in a series reviewing the Browns’ 2021 season …

Browns GM Andrew Berry was purposely vague in much of his season post-mortem on Tuesday. But one point he was unmistakably clear about was that roster turnover is coming.

“Regardless of if you make it to the Super Bowl or you are the 32nd team in football, every team has a fair amount of significant roster turnover. I think it is on average maybe one-third per year,” Berry said.

One-third of a standard regular roster of 53 means about 17 new players. So the Browns as we knew them in 2021 are going to change “significantly” in 2022.

But before the Browns can move forward to another busy transaction season – please don't call it the offseason anymore – they have to properly evaluate their 2021 roster. One of the biggest mistakes an organization can make is over-rating its own players. If that happens, it is sure to fail the following season.

Browns assistant coaches and personnel staff members are well into their evaluation of the 2021 roster. These evaluations will plot the path of their transaction season.

Over the next few days, we will examine the Browns’ 2021 roster in a season review format. This installment looks at each position group.

Analysis: When fully healthy, this group is without question the No. 1 team strength, particularly with line coach Bill Callahan and assistant Scott Peters overseeing it. The injuries to Conklin and Hubbard were a double-whammy, forcing Hance to play out of position at tackle and then Hudson to play before he was ready. Also, Wills suffered a setback in his second season, not totally due to an early ankle injury. Even though its seventh and eight players had significant snaps, the line was generally very good.

1. Should they seek a veteran replacement for Hubbard as sixth man or try to train Dunn or Hance as the heir-apparent?

2. Harris played fairly well in his first NFL start at center in Green Bay. Are the Browns ready to pass the baton to him and move on from Tretter?

3. Hudson is a converted defensive lineman and still relatively new to the position. Do they still see him as a possible replacement for Conklin in 2023?

Not under contract: D’Ernest Johnson.

Analysis: Injuries limited the Two-Headed Monster of Chubb and Hunt to only seven games together. Utilizing both together in the backfield, which would keep defenses guessing which one might handle the ball in run or pass, clearly is not a serious consideration of the coaches. One of the revelations of the season was that Johnson can be a tough, 100-yard rusher in the Callahan run scheme but his receiving skills are lacking.

1. Will Berry value Johnson enough to re-sign him as a potential RB2 replacement for Hunt, whose contract is up after 2022? A multi-year contract rather than the projected second-round tender for a restricted free agent of $3.9 million is in order.

3. The Felton experiment as a receiver/running back was underwhelming.

Not under contract: Rashard Higgins.

Analysis: This clearly is a position of great need. Vibes point to Landry leaving with a year left on his hefty contract. Peoples-Jones remains a bright, developmental talent, but did not progress nearly to a potential No. 1 role. Schwartz’s speed keeps him in the mix through his rookie contract, but he is really raw. I can’t explain the lack of coaches’ trust in Higgins. I view him as a solid No. 3, but they don’t.

1. How much did the torn ACL injury suffered by Alabama’s Jameson Williams in the CFP National Championship alter the Browns’ draft plans?

2. Are Ohio State’s Garrett Wilson and Chris Olave big and tall enough for the Browns’ liking to merit the No. 13 overall pick?

3. Has Landry asked for a change of scenery?

Others under contract: Harrison Bryant.

Analysis: Kevin Stefanski’s fondness for 13 personnel – aka three tight ends – would be more easily understandable if one of them could stretch defenses vertically and make explosive plays. Njoku has done that, but not consistently, of course. A lot of fans want to part with Hooper, but his contract probably assures him of another year.

1. Whatever happened to that chemistry between Baker Mayfield and Hooper forged in Camp Mayfield in Austin, TX, in July?

Others under contract: Case Keenum.

Not under contract: Nick Mullens.

Analysis: Mayfield’s worst season was marred by the early injury to his left shoulder and also by the fallout of Odell Beckham Jr.’s public broadsides via his father. His game was affected physically and mentally by the events of the season. Keenum was 2-0 in two emergency starts – thanks to Stefanski’s commitment to the running game. Mullens’ one start merited a longer look; his clutch, fourth-quarter drive in the Raiders game was something not seen by Mayfield all year.

1. Berry’s post-mortem comments about Mayfield should not be interpreted as an emphatic commitment  to Mayfield beyond 2022. Berry's duty is to explore all options to improve the position.

2. Keenum’s future is iffy without a contract restructuring.

3. Mullens deserve an invite to camp.

Analysis: The Garrett-Clowney combo was good and needs to be kept together. Clowney missed only one game because of injury (two others with COVID) and sounded agreeable after a profitable, two-sack day in Game 17 to returning. McDowell was quite a find and should keep improving after a four-year layoff. Everything else is a matter of one-year fixes and developmental players.

1. Can Clowney be convinced to return on another short-term deal or does he seek greener pastures?

2. How high do the Browns give priority to a developmental pass rusher?

3. Will Berry go the one-year deal route to fill in the blanks?

Analysis: JOK is a bright light who could be a difference-maker if he can stay healthy. The veteran presence of Walker and Smith should not be minimized; ultimately, Smith made more big plays.

1. Can Takitaki and Wilson take their games to the next level in their fourth years?

2. Will Berry try to bring back Walker or Smith or will he go back to the free agent market for stop-gap veterans?

3. Can Phillips stay healthy? If so, he looks like a player.

Analysis: After some early growing pains, this position group developed into the defense’s strength. It is deep and talented. Ward had undeniably his best year, missing only one game because of injury and one with COVID. Newsome will make all the All-Rookie postseason teams. It was important that Williams and Delpit each came back strong from 2020 injuries. They should have quantum improvement in 2022 – one year removed from their season-ending injuries.

1. If the Browns choose to retain only one, is it possible the emerging Stewart earned a new deal more than Harrison?

3. Green is a tall cornerback who missed five games. If he can stay healthy, his development will be intriguing.

Others under contract: Chris Blewitt.

Analysis: It’s improbable that special teams coordinator Mike Priefer is under fire internally, but the overall play of his units simply has not been good enough. Coverage units are fine, but the return units are non-explosive and drop too many balls. And what about those onside kick muffs? Did we mention there is little confidence in the kicking game?

1. Can Berry find a long-range, dependable kicker in the draft or free agency?

2. Will Priefer change conservative attitude and strive for a return specialist who can energize the offense?

3. Were the Browns too hasty in letting punter Jamie Gillan go?
[TG1]