As They Approach Their Second Pro Meeting, Baker Mayfield Has Made Up Some Ground On College Rival Patrick Mahomes 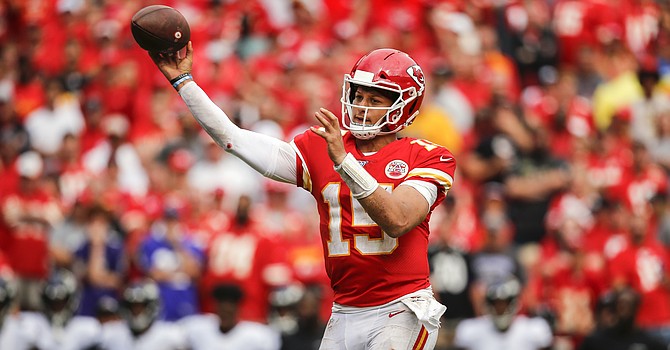 Patrick Mahomes distanced college rival Baker Mayfield by earning an MVP award, a Super Bowl ring, and a $500 million contract. But Mayfield is gaining ground on him. (NFL Spin Zone).

Baker Mayfield and Patrick Mahomes have been on different career arcs since their legendary Big 12 Conference duel in 2016, won by Mayfield.

But as they meet for the second time as pro quarterbacks in an AFC divisional playoff game on Sunday, Mayfield has definitely closed the gap.

In college, Mayfield quarterbacked Oklahoma to a breath-taking 66-59 win over Mahomes and Texas Tech, the school from which Mayfield transferred. Mayfield threw for seven touchdown passes and 545 yards; Mahomes had five TDs and 734 passing yards.

“It was an unbelievable game and unbelievable atmosphere. Just the back and forth is something that I will not forget,” Mayfield said on Wednesday.

When the two gunslingers met in their first NFL matchup in 2018, Mahomes dominated. Mayfield was at a decided disadvantage.

It was only Mayfield’s sixth career NFL start. It came the week the Browns fired coach Hue Jackson and offensive coordinator Todd Haley and replaced them with Gregg Williams and Freddie Kitchens. Mayfield had to pick up the pieces of another Browns season blown to smithereens.

It was Mahomes’ first season as Chiefs starter. In the game in Cleveland, Mahomes improved to 8-1 as he breezed by the Browns, 37-21. Kareem Hunt, then with the Chiefs, had two rushing touchdowns and one receiving.

Mahomes went on to win the MVP award after throwing 50 touchdowns. The following year, he won the Super Bowl MVP award in leading the Chiefs to their first NFL championship in 50 seasons. Soon after, the Chiefs signed him to the largest contract ever given by a pro sports franchise -- reportedly $503 million over 10 years.

Now Mahomes is trying to become the first NFL quarterback to win back-to-back Super Bowls since Tom Brady in 2005. And Mayfield is the first quarterback standing in his way.

The field has been leveled in their second meeting. Mayfield has improved dramatically in an offensive system and support staff built by coach Kevin Stefanski. His surrounding cast is better, too.

Mahomes’ relevant numbers outshine those of Mayfield over the full season. But over their last six games, Mayfield is right there with him.

“I think he is a heck of a player,” Chiefs coach Andy Reid said. “He did a great job in college. He is driven. He wants to be great. That is how he goes about his business. He sure does a nice job with it. I would just tell you he has made huge strides. I just like his attitude and the way he goes about it.”

The stakes are so much higher on Sunday in their second pro meeting.

“It is always fun to play friendly competition and playing against people you are familiar with,” Mayfield said. “He has gotten me so far in the league, so I have to see what I can do.”

Hell Week appears over for the Browns.

On Wednesday, cornerbacks Denzel Ward and Kevin Johnson were activated from Covid-reserve and rejoined the team. Also, offensive line coach Bill Callahan was cleared to return after a two-week battle with coronavirus.

And practice was held outdoors – for the first time in three weeks.

On Thursday, coach Kevin Stefanski expects to be cleared to rejoin his team after his bout with Covid. Also, left guard Joel Bitonio and receiver KhaDarel Hodge are eligible to return.

Stefanski is not counting his chickens before they are hatched, but his spirits certainly seemed higher than in recent weeks.

“We are looking forward to getting a full complement of guys,” he said. “Anytime you get good players back – again whether it be injury or the COVID list – it is always a big boost for your entire team.”

Covid is no hoax

Neither Ward nor linebacker B.J. Goodson know how they contracted the coronavirus. Both did all the right things and were knocked off their feet by Covid-19.

“It was a little rough,” Ward said. “I lost my sense of smell and my sense of taste, so that was really different. All of the food just tasted the same. I was really just picking food for the texture of it because I could not really taste it. It was not great. I am glad I got over it and hoping everybody still continues to stay safe and wears a mask and tries to beat it.”

Besides the lost of taste and small, Ward said he experienced body aches and chills, and headaches. Ward missed two games and is only concerned now with getting his stamina back for Sunday’s game.

Goodson missed two games before returning for the Steelers game. He led the Browns with 10 tackles but suffered a sprained shoulder. Goodson did not practice on Wednesday but said he “for sure” planeed to be ready to play on Sunday.

Goodson said his symptoms were fever, chills, body aches and loss of taste and smell.

“It hit really hard – really, really hard,” he said. “During my downtime, I really just felt bad for those who are older who experienced what I went through. It is a tough thing, and I am just thankful for the staff and all that they did for me during my time in need.”

Goodson said he felt bad that his positive test also exposed five teammates, including the team’s top four receivers, the day before the Jets game. “Everything just happened so fast. It was just a pretty crazy moment and kind of an unbelievable moment, especially for a guy like myself who tries to do everything the right way,” he said. “Unfortunately, I was in a situation where I put other teammates at risk so they had to suffer the consequences of our actions, so to speak, which is tough. You never know. You just never know. I think that is the biggest thing with it is you just never know. It is a very serious deal.” …

The only other players who did not practice were right tackle Jack Conklin (hamstring and knee) and tight end David Njoku (hamstring). Stefanski termed them “day to day” …

In the two-game absence of Ward and Johnson, Robert Jackson and M.J. Stewart held down the fort in two successive wins against the Steelers. Jackson’s season is over after suffering a hamstring injury and going on injured reserve. Stewart had interceptions in both games subbing for Johnson as the nickel back. “Those picks were huge,” Ward said. “He stepped up big time. I told him he has to run it back this week and get another interception. All of the guys stepped up and played big in these big-time games.”