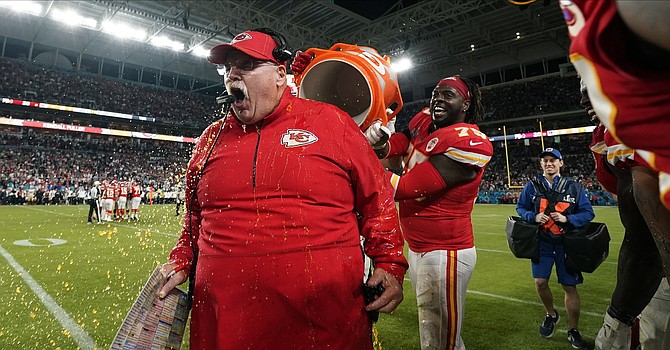 Not only is Andy Reid one of the most lovable coaches in the NFL, he's among the winningest, currently ranking No. 5 all time with 236 career victories. (WIBW.com)

1.As the AFC No. 1 seed, the Chiefs are the only team with a post-season bye. How will they handle it? Well, Andy Reid simply has the best record following byes of any active coach. In 22 years, counting 14 as Philadelphia Eagles coach, Reid’s teams are 19-3 in games after a regular-season bye and 5-2 in postseason. That last record includes a win in Super Bowl 54 last season after the conference championship week bye. There is one difference this season, however. Reid rested almost all his starters on offense and defense in the Chiefs’ 16th game, which they lost. So, his team essentially is coming off a two-week bye. He did not do that in Game 16 in 2019 because the Chiefs needed a win to wrap up the No. 2 seed. They came off that bye and fell behind the Houston Texans, 24-0, before winning going away, 51-31.

2.The Chiefs seemed to be a stronger team a year ago heading into the postseason. They were 12-4 with a point differential of plus-143. This year they were 14-2 but had a point-differential of plus-71. What’s the difference in the Chiefs this year? There are reasons there hasn’t been a repeat Super Bowl champion since 2005. Being the ‘hunted’ rather than the ‘hunter’ is a large one. Absorbing opponents’ best shots trying to upset the reigning champions week after week takes an emotional toll over a long season. Also, rarely does a team have good injury fortune over successive seasons. This year, injuries have hit the Chiefs hard at offensive line and running back. They had two offensive linemen opt out because of Covid-19 concerns. Two important starters on the offensive line – left guard Kelechi Osemele and right tackle Mitchell Schwartz -- were lost to injured reserve in October. Rookie Clyde Edwards-Helaire has been hobbled of late with a high ankle sprain and replacement LeVeon Bell recently has given way to Darrell Williams as the feature back. A lot of warts on a team can be covered up by a quarterback like Patrick Mahomes.

3.Through the first nine games, Mahomes threw 25 touchdowns v. 1 interception. Over his last six games, that ratio was a more mortal 13 v. 5. Now, the Chiefs were 6-0 over those last six games, but their average margin of victory shrunk to 4.2 points. Against Mahomes, no lead is safe. He has won seven times in a row in games in which he trailed by 10 or more points. That doesn’t count the 2019 playoffs when Mahomes came back from deficits of 24-0 to Houston, 10-0 to Tennessee and 20-10 to San Francisco in the Super Bowl. No Super Bowl winner ever came back from 10-plus point deficits in every postseason game before the Chiefs. The way to beat Mahomes is to be within one score, possess the ball last and manage the clock to score the winning points with very little time left on the clock.

4.The Chiefs’ defensive numbers are only nominally better than the Browns’. They have two playmakers of note. Defensive tackle Chris Jones is their best defensive lineman (7.5 sacks, 28 pressures, two forced fumbles). Safety Tyrann Mathieu leads with six interceptions, one for a touchdown, and co-leads with nine more passes defensed.

Small world: Offensive tackle Mitchell Schwartz (injured reserve) was a second-round pick of the Browns in 2012 and left for Kansas City in free agency in 2016 … Center Austin Reiter played for the Browns in 2016-17 … Guard Andrew Wylie was on the Browns roster for a bit in 2017 … Tight end Travis Kelce is a native of Cleveland Heightsl.