It’S Too Early For The Odell Beckham Jr. Brushfire To Suck The Energy Out Of Another Browns Season 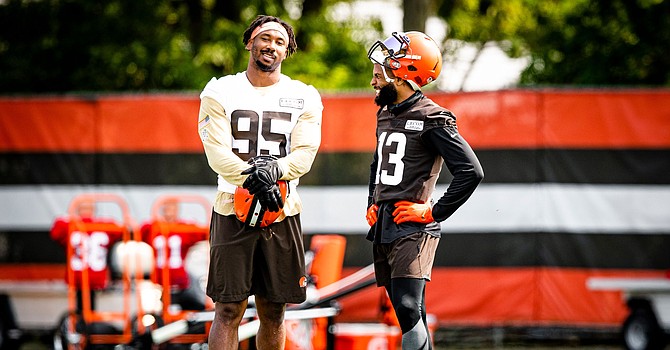 It took all of one game for the Browns to fall into the Groundhog Day effect.

The offense has a bad day. Baker Mayfield misses several connections with Odell Beckham Jr. Beckham flashes some bad body language. The coach is asked why this is happening. The quarterback is asked about forcing the ball to Beckham. Beckham is asked about being frustrated and says he is misunderstood.

Soon enough, a story or rumor originates in New York about Beckham asking for a trade or the Browns wanting to trade Beckham. Within minutes, the story or rumor is shot down by somebody with a Twitter account on the other side of the country.

And that’s where it stands for now. To be repeated at a later date, no doubt. And again. And again.

So here are the applicable quotes from those involved:

Mayfield: “I think [getting Beckham the ball] has to come naturally. Obviously, you game plan and you scheme up things to get the ball in your playmakers’ hands, but when it comes to game time, they are going to give us certain looks that might take that away. We had a couple plays for him early on, and the Ravens did a good job of taking that away so we had to go through the reads and get the ball into other guys’ hands.

Beckham: “With the way that I feel like I have been misrepresented to the world, it makes it hard and just seem as if ‘Oh, I just want the ball,’ and all these things, when really, I just want to help. I just want to be able to help this team in any way that I can. You kind of get the sense of just playing your role, and you have to trust that the coaches are going to put you in the right position and we are going to be able to go from there. I am not very vocal about that, and that could be my fault and something that I need to learn from.

“That is just the way my life is going. You have to watch everything you do. Everyone is always watching. If you do not have the same reaction that somebody may like, then a story or a headline or whatever it can be written about you. That is just the position I am in. I have helped put myself in that position by some mistakes and a lot of by what I did on the field – all the good things that I feel like we often forget about. That has just kind of helped put me in this position where the spotlight is always going to be on me, right, wrong or indifferent, and know that is something you have to deal with, live with.”

Stefanski: “We give the quarterbacks very black-and-white reads. I think that is what you have to do with coaching these guys. It is not every single play that it starts with Odell. There are plenty of plays that start with him, but we make sure that we coach the quarterback on the reads, and the ball goes where the defense dictates based on the read.”

So the fixation on getting the ball to Beckham now is in its second year, with a second coach.

This was a brushfire that Freddie Kitchens couldn’t put out and it sucked the energy out of the 2019 offense.

This is a brushfire that Stefanski has to put out or it will suck the energy out of his offense.

Two years ago, the defection of coach Hue Jackson to the Bengals after he was fired by the Browns lit a spark to this long-dormant division rivalry. Now it may be reignited again because of a kicker.

Shortly after the Browns abruptly waived Austin Seibert for missing two kicks in a 38-6 loss in Baltimore, the Bengals claimed him. The Bengals lost their opener when kicker Randy Bullock missed a 31-yard game-tying field goal with 2 seconds left against the Chargers.

Bullock, who made two long field goals in the game, clutched both calf muscles after the miss. But he was a full participant in practice for the Bengals on Tuesday and coach Zac Taylor stated, “Randy’s our kicker.”

So why did the Bengals claim Seibert?

Insurance? They will have to carry him on their active roster for a minimum of three games. It’s not like the Bengals to pay full salary for insurance. They could have signed a kicker to their practice squad for insurance.

My hunch is that Seibert will kick for the Bengals on Thursday night but Taylor is well aware of Seibert’s mental problem with kicking into the Dawg Pound end zone in FirstEnergy Stadium and the coach doesn’t want Seibert to fret about it for 48 hours.

The Browns promoted Cody Parkey from their practice squad to replace Seibert.

A Parkey v. Seibert kick-fest could endanger every goalpost in the stadium. They better have replacements in storage.