Should The Browns Eye A New Pass Rusher In The Draft? 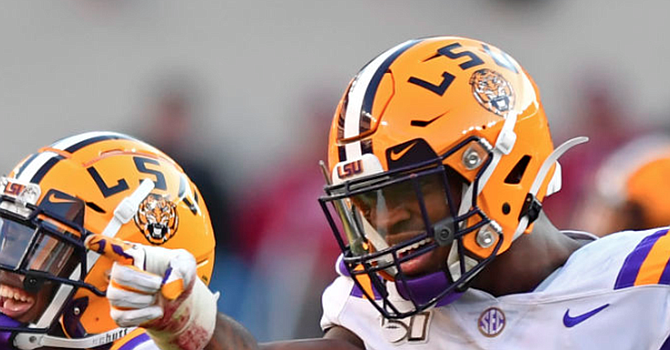 Edge rusher K'Lavon Chaisson may be another LSU defender for the Browns to consider in the first round of the draft. (theadvocate.com)

Takeaways from the Browns’ transaction season …

With a month to go before the scheduled NFL draft on April 23-25, most of the speculation on the Browns’ first pick has centered on the top four offensive tackles. The lone defensive player in the conversation has been hybrid linebacker/safety Isaiah Simmons of Clemson.

Should there be another defensive player for the Browns to consider?

If so, maybe Louisiana State edge rusher K'Lavon Chaisson should enter the conversation.

Chaisson is the second- or third-ranked edge rusher behind Ohio State’s Chase Young and A.J. Epenesa of Iowa, per the draft experts. ESPN’s Mel Kiper ranks Chaisson No. 16 on his big board. ESPN’s Todd McShay mocked him to the Atlanta Falcons at No. 16.

So why would the Browns consider Chaisson at No. 10? I don’t think they would.

But if they would somehow acquire disgruntled Washington Redskins left tackle Trent Williams prior to the draft, they would be out of the market for a tackle with the No. 10 pick. Their attention very well could turn to trading down to acquire extra picks and taking a defensive player of need later in the round.

Their top positions of need after left tackle are linebacker, safety and edge rusher. Chaisson would line up at linebacker in the Browns’ 4-3 scheme and possibly move to the edge as a pass rusher on some downs.

Chaisson measured 6-3 and 254 pounds at the Combine, but did not work out.

He is considered super quick off the snap of the ball, extremely flexible – a la Myles Garrett – able to seal the edge in the run game and has the athleticism to drop into pass coverage, if need be.

At the Combine, Chaisson also displayed a gift for salesmanship.

He said, “I'm actually the most valuable player in the draft, when it comes to it. We all know that. When you hire someone do you want to hire someone who speaks one language or do you want to hire someone that speaks three languages? I speak three languages. I do pass rush. I can drop in coverage and cover anybody you want me to cover. I can play the run. And no offensive lineman has ever just moved me off the ball, or bullied me. So I feel like that's what makes me more dimensional. And a more valuable player than anybody else in the draft.”

Chaisson may not be at the forefront of Browns draft discussions right now. But if they acquire a veteran left tackle and elect to move down in the first round, you never know …

Kevin Stefanski’s first offseason conditioning program as Browns coach was supposed to start on April 6. It has been presumed since the outbreak of the coronavirus pandemic that it would not start on time – and possibly not happen at all.

Now there is clarity from the NFL that it definitely will not start on time.

According to ESPN’s Adam Schefter, Commissioner Roger Goodell sent a memo to all clubs on Tuesday evening asserting that all club facilities will remain closed to all personnel except trainers or physicians providing medical treatment to players, personnel maintaining the security of the facilities, and technological employees maintaining the operation of IT networks to enable football and other personnel to work remotely.

The memo stated the guidelines take effect on Wednesday 6 p.m. and they will be reassessed in two weeks on April 8.

It has been taken for granted that new offensive tackle Jack Conklin would continue his NFL career on the right side for the Browns and not be a candidate to shift to left tackle, where he played some at Michigan State.

Because Stefanski or offensive line coach Bill Callahan haven’t been available to media since Conklin’s signing, nobody has really stated it directly.

But on a conference call, Conklin left no doubt that the Browns consider him their cornerstone right tackle in Stefanski’s zone-blocking scheme.

“I like to think everything starts up front with the O-line and that is really what gets the offense rolling,” Conklin said. “Whether it is the run game or the pass game, they work in cohesion. If we can get the run going, that is going to lead to a lot more passes downfield and open receivers and a lot more opportunities for Baker [Mayfield] and the receivers downfield to get open.

“I am just a right tackle. I just have to try to do my job.”

So that officially leaves finding a left tackle the final piece to Stefanski’s offensive puzzle.