Chemistry With Browns Receivers And Baker Mayfield Remains On Hold 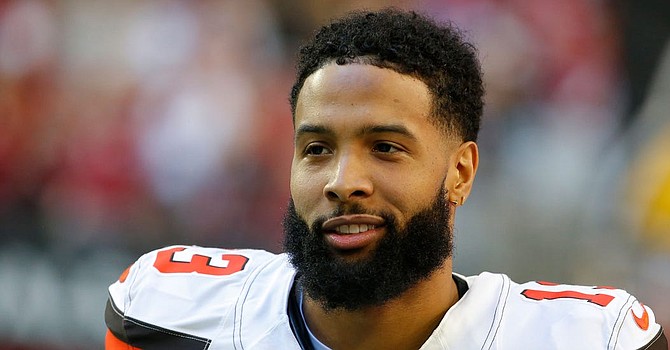 Odell Beckham Jr. looked good catching passes from Cam Newton in recent social media posts, but he hasn't had any time on the field with Baker Mayfield. (Business Insider)

Other than offensive line, the position group that probably has suffered the most from lack of time together on the field because of the Covid-19 pandemic is wide receiver.

Lack of chemistry between the receivers and quarterback Baker Mayfield was an issue all of last season. Efforts to change that in 2020 have been thwarted by offseason surgeries needed by Jarvis Landry (hip) and Odell Beckham Jr. (core muscle).

The rehabs of Landry and Beckham have gone well, but the pandemic restrictions have forestalled chemistry-building with Mayfield.

“Obviously, the physical aspect of it, there is a void that is impossible to fill,” said Browns pass game coordinator and receivers coach Chad O’Shea. “But I think that what has been most impressive and what excites me about the future of our offense is the hard work that these guys have put in and the way in which they have approached what we have been dealt with as far as some of the limitations, and those, they really have not looked at them as limitations because they have just worked their tail off to try to be better.

“I think that the chemistry is built through time investment, and certainly, we have done as much as we can together to this point.”

O’Shea added that the amount of quality of work done with his position group during the virtual offseason program “has far exceeded what my expectations were at first.”

One of the interesting developments to come is which player will emerge as the so-called third receiver in coach Kevin Stefanski’s varied offense.

Will it be returning Mayfield target Rashard Higgins? Or physically impressive rookie Donovan Peoples-Jones? Or will Stefanski opt to take advantage of the unique running back combination of Nick Chubb and Kareem Hunt and use Hunt as a motion option into the slot receiver position?

“We have a lot of weapons on offense,” O’Shea said. “[We’re] really excited about it.

“Those are discussions that are kind of ongoing right now. We just try to really teach the offense at this point, build a foundation for the players to learn and then once we move forward here and get closer to being out there on the field, we will really have further discussions on exactly how we are going to use the personnel and what personnel groups we are going to be in.

“I do not think it is set in stone right now, and our players understand, too, that it is a situation that is constantly evolving and we are learning about our players and what they do best. Once we really get a feel for that, we get on the field and I think that it will narrow it down at that point.

Rookie receivers historically have a tougher time than most positions adapting to the NFL game.

The lack of field work definitely does not help flatten the learning curve for Peoples-Jones, who was a five-star recruit out of Detroit whose career at Michigan didn’t meet lofty expectations.

“I think even more so than other years, this period is so critical for us in our teaching and our learning that we get it and we get it right because we have to hit the field and hit the ground running.”

As for DPJ (6-2 and 212 pounds), if nothing else the sixth-round pick could make his mark as a return specialist in his first year.

“I think the one thing that jumps out in our evaluation of him is everything off the field was so solid,” O’Shea said. “He has great character. He is highly intelligent. There were people who gave him very high recommendations throughout the process. We had a chance to interview him at the combine and were very impressed with him as a person.

“I think it starts there that we thought we were getting a solid person who has the ability to play from a mental standpoint in several positions, which will help him increase his opportunities with us. Then obviously, the physical skillset was pretty obvious. It jumped out at us as far as where he is physically and the potential that he has to grow even more.”