Through Adversity And Social Change, Kevin Stefanski Is Building A Team As Best He Can 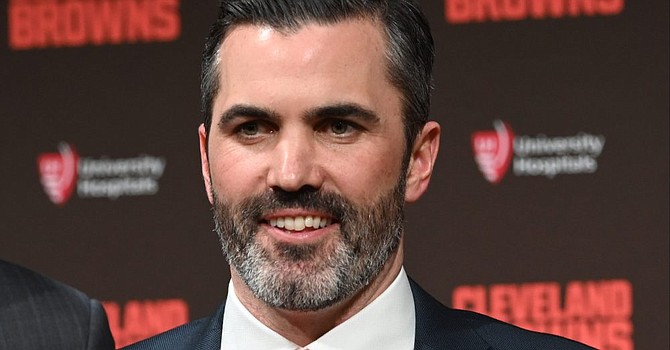 Kevin Stefanski says he has his players' backs in their fight for social justice. (usatoday.com)

Kevin Stefanski still has not met his entire team face-to-face.

Think about that for a minute.

NFL training camps are about eight weeks away. And the new Browns coach has yet to have opportunity to “command the room” of a full team meeting in person. That’s always the first test for a new coach.

He hasn’t been able to look his players in their eyes or shake their hands, much less work with them on the field.

Oh, there have been countless Zoom and Microsoft team meetings and virtual classroom sessions to install new schemes on offense and defense.

But the Covid-19 pandemic and resulting quarantine protocol has robbed Stefanski of the “get to know you” time so essential for a new head coach.

And yet it seems that Stefanski has formed a strong bond already with his players.

“Kevin is obviously an extremely sharp guy,” Baker Mayfield said. “He is able to relate to everybody. That is one of the best parts about him and being around him so far. Just hearing his message, everything he does is with a purpose. It is a very deliberate message, and he has everybody believing in that on the staff. I think that is how the foundation should be set, and he has done an unbelievable job of that.”

A call to leadership

Mayfield’s comments were spoken on a Zoom call a couple weeks ago. Since then, the George Floyd killing by a police officer in Stefanski’s adoptive hometown of Minneapolis has shaken the country and re-inspired the movement for racial justice and police reform advocated by Colin Kaepernick in 2016.

Stefanski inherited a team loaded with strong-minded individuals determined to fight racism with action, not just words and videos. It demands leadership from the new coach, and he is answering the call.

“I am just so keen on dialogue with our players and listening,” Stefanski said. “My big note to our players is that I have their back, and that is not just lip service. I am standing right there beside them. They have my support, and I promise you one thing, we will just continue to listen to each other from a place of mutual respect.”

Since Floyd was killed, Stefanski said “we have spent every meeting discussing” social justice.

He has attached his name to the Players Coalition letter to U.S. Congress supporting a bill to hold police officers accountable for using brutality on African-American victims. He has invited guest speakers to address the team on racial justice, such as Manhattan district attorney candidate Alvin Bragg. He has read and listened to the leading advocates of Black Lives Matter. He even attended a peaceful protest in Avon with his two sons and Browns VP of communications Peter John-Baptiste last weekend.

“I think it was just a really enlightening moment for me, and I was able to share that with my boys at a young age,” Stefanski said. “I think … part of this is making sure that we are doing everything in our power to educate each other and especially the next generation.”

Stefanski said the dialogue with his players will be ongoing and together they will decide how the players and organization react to the National Anthem when games return in the fall.

“We have started the process in that dialogue, but I can’t speak necessarily to the future in that regard,” Stefanski said on the issue of kneeling during the Anthem. “I can just promise you this, we will spend as much time as needed to make sure that we are all on the same page and we are a united front from a player, staff, you name it. We want to make sure that we are constantly staying in the dialogue on these issues because it is not something that is just going to go away.

I can’t think of another Browns coach faced with more adversity than Stefanski before his first training camp.

Yes, Pat Shurmur had to endure an owners lockout in 2011 that wiped out the minicamp season before his first training camp as a rookie coach. What has been placed before Stefanski is unprecedented. There is no manual.

A year ago, first-year coach Freddie Kitchens cautioned everybody that a ballyhooed roster and great expectations meant nothing if the players did not bond as a team through inevitable adversity. The adversity came and the “team” never materialized.

The silver lining behind the adversity faced already by Stefanski is that it has forced him and his staff to be creative in developing a “virtual” bond with his players. Somehow, camaraderie has come.

“It has,” Stefanski said. “I am just so sensitive to not just worrying about the Xs and Os right now. It is important. We are installing and teaching a new offensive system and a new defensive system, so we have a curriculum to achieve that.

“All the while, we have to come together as a team. The challenge has been to come together while many miles apart. It is a challenge but not something that we can’t do. We have tried a few different things. We have some unique people on this team, I will tell you.

“Again, anything to kind of get a laugh, keep this thing as loose and start to come together. That is going to be a challenge when we do physically come together, as well. It is something I am thinking very seriously about. As important as the Xs and Os are, we are working really hard on the team building aspect, as well.”

In the NFL, teams win. Sometimes the Xs and Os just get in the way.