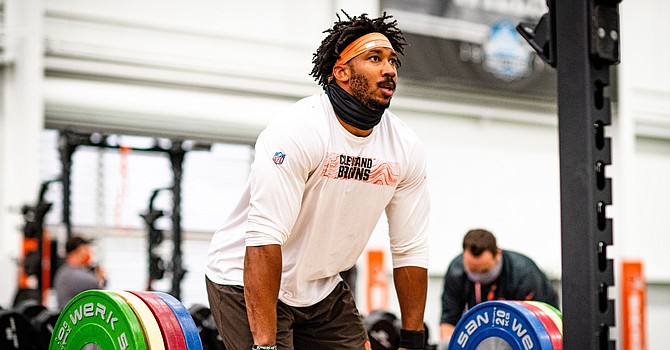 Can Myles Garrett lift his game to justify his $125 million contract? (clevelandbrowns.com)

Can we spend at least one football column without talking about Covid-19?

There may be a lot of questions about the coronavirus, but there are also many more about the Browns as they hit Phase 2 of training camp this week.

On Friday, coach Kevin Stefanski gets his full team on the practice field. Albeit the players will still be without pads, but it signals progress towards a more familiar training camp.

And with it comes some hard questions about a roster that is improved on paper but still unproven.

1.Mayfield has impressed everyone by reporting in great shape, by connecting with teammates and the new coaches, and by committing himself to returning to the career trajectory started as a rookie. The Stefanski offensive system should be ideal for him. Now, can he win against good teams on the road?

3.How will Gilbert look in Stefanski’s system?

1.How will the coaches divide the rushing load with Hunt on hand for the beginning of the season?

2.How creative will the coaches be in utilizing Chubb and Hunt on the field together?

3.Will Janovich have a big impact on the short-yardage run offense?

1.With Landry being cleared to practice and promoted off the PUP list, can he realistically be 100 percent for the season opener?

2.Will Beckham Jr. and Mayfield get on the same page from the beginning of camp – and stay there?

3.What opportunities will there be for a third receiver, and can Rashard Higgins replicate the chemistry he shared with Mayfield in 2018?

1.Will Hooper’s offseason workouts with Mayfield pay off immediately?

2.Can Njoku improve his catch percentage?

3.Can Bryant develop quickly enough to challenge Njoku for the No. 2 role?

1.Can Wills defy the odds and make the transition to left tackle without the benefit of a normal offseason and preseason games?

2.Does the opt out of three guards demand another addition or two at the position?

3.Can Harris get up to speed as a backup to Tretter?

1.Will Garrett take his game to another level after being given a $125 million contract?

2.Can Vernon stay healthy and rebound with a solid season in his contract year?

3.After the opt out of veteran Andrew Billings, can Elliott accelerate his progression and fill the role of No. 3 tackle?

2.Will the base defense evolve into a two-linebacker set?

3.What does Takitaki bring in his second season?

2 Will Williams get his hands on more balls?

3.Can Joseph stay healthy and make it through 16 games?

1.Can Peoples-Jones strike fear in opposing punt and kickoff teams?

2.Will Seibert be more reliable on PATs?

3.Will special teams coordinator Mike Priefer be more willing to inject some gadget plays in the repertoire?