The good news about this play was the Patriots were flagged for roughing the quarterback. It didn't matter. Baker Mayfield was knocked out of the game two plays later. (Cleveland Browns)

Stories this photo appears in: 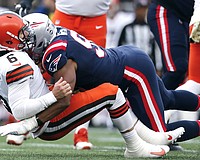 After having their most lopsided win, the Browns suffer their largest defeat under their second-year coach.