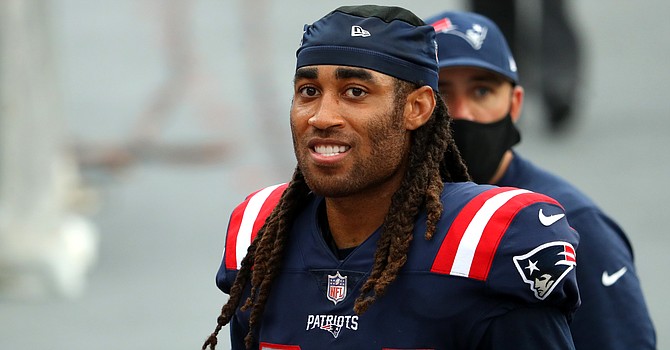 If there's one more high-profile player the Browns could add to close the gap to the Super Bowl, cornerback Stephon Gilmore would be a good choice. (Getty Images)

Ten takeaways from all over the world of sports …

1.If there’s one move the Browns could make to push them to the Super Bowl, I think it would be this: Trade for Patriots cornerback Stephon Gilmore. They’d have to extend his contract to a minimum of two years to reduce his salary cap number and probably give up at least a third-round pick. But acquiring Gilmore would: 1. Turn an improved but still tenuous secondary into THE position of strength on defense; 2. Reduce Greedy Williams to CB4, and 3. Free up the Browns’ first-round selection to bolster the pass rush. Remember, the organization’s top football minds all have expertise in defensive secondary. GM Andrew Berry was a cornerback at Harvard, coach Kevin Stefanski was a safety at Penn, and defensive coordinator Joe Woods was a cornerback and safety at Illinois State and has specialized in the secondary in his coaching career. I would think they’d have a unified belief in further upgrading that area of the defense.

2.I don’t know where Gonzaga’s 93-90 overtime win over UCLA in the second NCAA semifinal game on Saturday night ranks in Final Four history. As a sportswriter, I covered North Carolina State’s epic 54-52 upset victory over Houston’s Phi Slamma Jamma team in the 1983 NCAA Finals, and No. 8 seed Villanova’s 66-64 championship win over Georgetown in 1985, aka, the Perfect Game. Those were unforgettable. What I do know is this year’s NCAA tourney needed a game like Gonzaga-UCLA.

3.My hunch is that Hue Jackson’s tell-all book will never see print unless he self-publishes it. Publishers aren’t that interested in chronicling dumpster fires. Plus, Rob Chudzinski and Mike Pettine had similar tales of woe. Maybe they ought to pool their notes and co-author a real blockbuster.

4.Anybody still want to trade Baker Mayfield for Deshaun Watson?

5.Other than Terry Francona, Tony LaRussa is the only MLB manager I can name.

6.I don’t have a passionate choice for an alternative nickname for the Cleveland Indians, but I would be fine with Blues or Grays. Boring, but I can’t imagine any social group over the next 100 years or so would be offended by either.

7.If the Browns want to motivate Baker Mayfield even more, they ought to draft Texas quarterback Sam Ehlinger to compete for a roster/practice squad spot for the purposes of grooming him as an eventual successor to Case Keenum as No. 1 backup. Mayfield and Ehlinger were high school legends in Austin, TX, and have had a combative relationship ever since. “He doesn't like me, and I hope he knows I don't like him either,” Mayfield said in an interview in 2019. Ehlinger was ultra-productive at Texas but is projected for the later rounds because of arm talent. Some draft analysts have comped him to former Browns third-round draft pick and career NFL backup Colt McCoy, who just signed with the Arizona Cardinals for his 12th NFL season. Adding Ehlinger to the Browns QB room would bring an interesting dynamic, to say the least.

8.I’ve played golf for more than 50 years and have covered the 1979 U.S. Amateur and major senior tour events at Canterbury Golf Club, and many other PGA events in Northeast Ohio, but only recently did I learn something new about the game. And with Bryson DeChambeau threatening to drive the green on any dogleg Par 5 on the planet, this question came up: What do you call a hole in one on a Par 5, other than a hole in one? We know that one under par is a birdie, two under is an eagle and three under (a two on a Par 5) is an albatross. What do you call four under par on one hole? Well, what bird is bigger than an albatross? Yes, it’s a condor. According to intense Internet research, only five condors have ever been recorded.

9.The Patriots went 7-9 without Tom Brady and responded by spending $159.6 million in guaranteed money in free agency. The Red Sox started their season 0-3 at Fenway Park for the first time since 1948. Yes, Virginia, there is a sports Santa Claus.

10.Shohei Ohtani of the Los Angeles Angels became the first pitcher to bat second in his team’s batting order since 1903. On the mound, he topped 100 mph on some pitches. At the plate, he hit a 450-foot home run in his first at bat. Google Babe Ruth, young people.