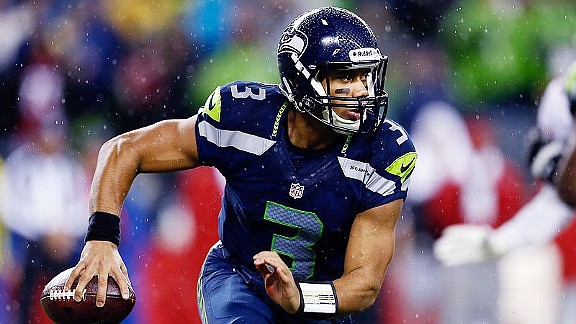 Russell Wilson is the NFL's MVP through the first 4-games, and he comes to Cleveland Sunday.

1.Russell Wilson has never missed an NFL start since winning the Seahawks starting job in 2012 and has never had a losing season. His career win percentage of .679 (79-37-1) is third among active quarterbacks behind Tom Brady (.779) and Patrick Mahomes (.773). He took the Seahawks to the Super Bowl after the 2013 and 2014 seasons – winning the first, and losing on a goal-line interception to the New England Patriots in the second. After signing a record $140 million contract extension in April, Wilson is off to his greatest season. He is first in completion percentage (.731), first in touchdowns (12), first in fewest interceptions (zero), third in average yards per attempt (9.03) and first in passer rating (126.3). He is coming off a near-perfect passer rating (158.1) in 30-29 victory over the Rams to put the Seahawks at 2-0 in the NFC West. Through one quarter of the NFL season, Wilson is the league MVP, for without him, the Seahawks probably would be a 2-3 team.

2.Much like Brady, Wilson has not been surrounded by superlative receiving weapons. His principal targets now are Tylor Lockett, the team’s former return specialist, who has never had a 1,000-yard receiving season, and rookie second-round pick DK Metcalf, who was the star of the 2019 NFL Combine. Metcalf, 6-4 and 229 pounds, has the flair for spectacular catches, and is averaging 22.3 yards on 12 catches.

3.GM John Schneider has rebuilt the team’s defense over the last two years as contractual issues and age forced the breakup of the Legion of Doom. The lone remnants of the team’s 2014-15 Super Bowl teams are a pair of linebackers – Bobby Wagner, the quarterback of the defense and the team’s best player after Wilson, and K.J. Wright. Schneider added a pair of veteran pass rushers in the offseason, Jadeveon Clowney and Ziggy Ansah. Clowney has more effective, turning in an interception return for a touchdown against Arizona, and a strip-sack and recovery against the Rams.

4.Feature running back Chris Carson has seemingly recovered from costly fumbles in each of the first three games. Each resulted in scores by opponents. Carson averages 4.0 rush on 380 yards in 94 attempts with one touchdown.

1.Russell Wilson has played the Browns only one time, winning, 30-13, in Seattle in 2015. This will be his first game in Cleveland.

2.At 68, Pete Carroll is the NFL’s oldest coach. He has not had a losing season since the Seahawks drafted Wilson in 2012. Carroll’s 136 career wins with the Seahawks, Jets and Patriots rank third among active coaches behind Bill Belichick and Andy Reid.

Small world: Offensive coordinator Brian Schottenheimer is the son of former Browns head coach Marty Schottenheimer … Cornerback Jamar Taylor played for the Browns in 2016-17 … Linebacker Mychal Kendricks was on the Browns roster in 2018 but was released in training camp because he lied to the team about his involvement in an insider trading scheme.