On The Road With The Cleveland Browns: Denver 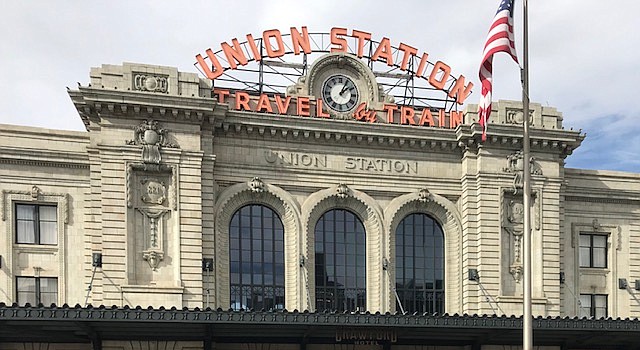 My early impressions of the Mile High City were shaped by the unbearable disappointment of “The Fumble” in January of 1988, perhaps the most indelible heartbreak loss in Cleveland sports history.

Adding insult to injury, the Browns’ team plane had a horrific takeoff in the wee hours of the night, and was nearly aborted at the last moment. The next morning, snow fell in curtains of white, delaying flights carrying Bloody Mary-eyed media well into the afternoon.

That was quite a bad first impression.

Over the years, scars healed. Earnest Byner emerged as a franchise fan favorite rather than a goat. And Denver became a favorite destination of traveling Browns fans.

They were in full force last weekend, descending off the commuter rail from faraway Denver International Airport to the historic Union Station, and spilling onto the streets of downtown. There was more Brown and Orange milling about than Broncos orange.

Visitors to Denver are automatically drawn to the mountains.

The mountain air is so invigorating, you just want to explore the raw wilderness of Rocky Mountain National Park. If you’re from Cleveland, the unfamiliar sight of elk, bighorn sheep and moose roaming the hundreds of miles of trails is hard to resist. Make sure your cellphone is charged for this excursion because the photo opps are plenty.

Without adequate hiking boots, however, I opted to stay grounded on the impeccably clean streets of downtown.

I ambled out of Union Station and into the Wynkoop Brewing Company across the street.

Housed in an 1899-built brick mercantile building, which is said to be haunted, Wynkoop was Denver’s first brewpub and is one of the largest in the country. I took the 45-minute tour and sampled an amber ale, and three other beers I didn’t care for. Included was certifiably the worst beer I ever tasted. Beet beer? Ugh.

The main artery is the 16th Street Mall, a one-mile-long granite-paved promenade designed by Rock and Roll Hall of Fame architect I.M. Pei and filled with outdoor shopping and restaurants. In a street fair over the weekend, you could shop for sheepskin boots right next to free samples of CBD tea and an assortment of hemp products. This great people- and dog-watching venue was loaded with Browns fans.

From 16th Street, you can actually walk to Empower Field at Mile High. (A nice enough football stadium, but nothing like its rickety predecessor, Mile High Stadium, which actually rocked to and fro on that fateful AFC Championship Game in 1989.) It’s about a 45-minute hike from downtown, but doable. I did it last year when the Browns visited for a Saturday night game in December. But this time I traveled to the game via a $9 Uber ride.

The game was a bomb for the Browns, of course, but it didn’t spoil the weekend.

The fresh air of Denver is prevalent even in the pre-dawn hours. The 20-minute walk from my hotel to Union Station for the train to the airport is not only safe at 5 in the morning, but also invigorating -- a natural wake-up call for the start of another long day of travel home.